A Night in the Wild

Over the weekend, I got together with 7 other guys and we went camping in Tennessee’s very own Percy Priest Lake.

We knew we wanted to go camping. Then one of us mentioned a spot that he had gone once where there was both cliff jumping and canoeing involved. We were immediately sold. Fast forward a couple weeks and there we were standing outside the Outdoor Rec Centre where we rented 2 canoes, 4 paddles and 8 life jackets. Now you’re probably sitting there thinking, “Wait, but Jae… a canoe fits 3 people” Well my friend, we made it work with 4 people… twice. 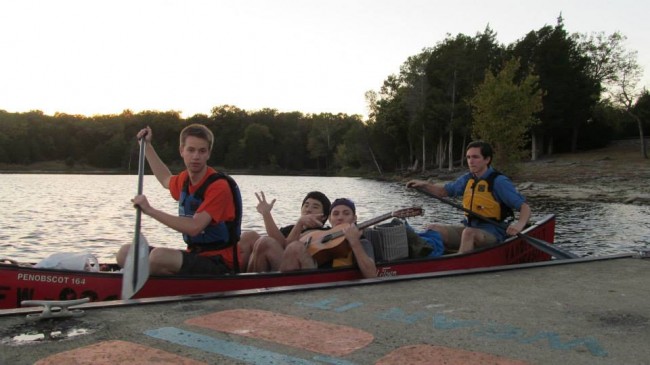 I can’t say it was the brightest thing to do since it weighed down the boat significantly having another 150 pounds in addition to the tent, food and personal belongings each of us brought in our canoes. But, I’m alive so it worked out fine.

Once we were out on the water, we canoed for about 30 minutes to one remote island out of many other islands in the vicinity. It looked real sketchy at first but then our guide took us on a short walk that led to our campsite which was at the top of a cliff where many come to cliff jump. Luckily for us, there were no cliff-jumpers at the time and so we set up camp and attempted to light a fire. 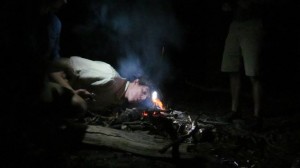 Initially, we tried to be neanderthals with our tinder gathering with a progression to small sticks but once that didn’t work out, we 21st century’d it and poured lighter fluid over our bag of coals. Once we had our fire, it was time to feast. And boy, did we have a feast or what. We had these things called “Hobo Meals” where we put ground beef, potatoes, onions and carrots in  uminimum foil, topped it off with seasoning and left it on the coals to cook. It was delicious. I want to buy a grill just so I can make those meals for myself without having to do the whole camping outside part.

We all went to bed fairly early since theres nothing to really do when the sun goes down. The night went by and the early morning was very cold. Like really cold. I should have brought pants. Oh well. We said a quick morning prayer then went on our way to go swimming. While the others swam, I canoed around the waters. By the end, I called an end to all activities as it was time to head back to civilization to watch our Vanderbilt Commodores play the Georgia Bulldogs. It wasn’t a pretty game but we washed away our sorrows with Waffle House.

We returned on Saturday ending our one night adventure in the wild. It was a great trip that was only a 30 minute drive away from campus. Just another reason why Nashville is so great.