Approximately one month ago, the women’s club soccer team packed up our suitcases and headed to Winston-Salem, North Carolina for the NIRSA Regional tournament.  Going to this tournament meant that we’d miss one day of classes, since it started on a Friday.  I’ve said it in blog posts before (and I’ll say it again when I blog about nationals), but professors at Vanderbilt are awesome when it comes to accommodating things like this (assuming you tell them about it far in advance, that is!) I only had to miss two of my classes that Friday, and as soon as I found out that was the case, I spoke with my professors to make sure that missing class that day wasn’t going to affect my grade, and that I wouldn’t be missing any assignments. Once all of my schoolwork for the weekend was taken care of, I was eager to get to the tournament and just enjoy a weekend of soccer and some time away from campus.

Even though the team has qualified in the past, this was our first year going to regionals, which is exciting for two main reasons: 1) doing well at regionals would allow us to qualify for the competitive division at the national tournament in Phoenix, and 2) more soccer = more fun.  Adding to the fun was the fact that my parents flew all the way to North Carolina to watch me play in the tournament!  Since I’m a senior, this is my last year on the team, and I’m pretty sure my dad is starting to panic that he’ll never see me play soccer again–so they’ve been to more of my games than usual this season.  See this post. 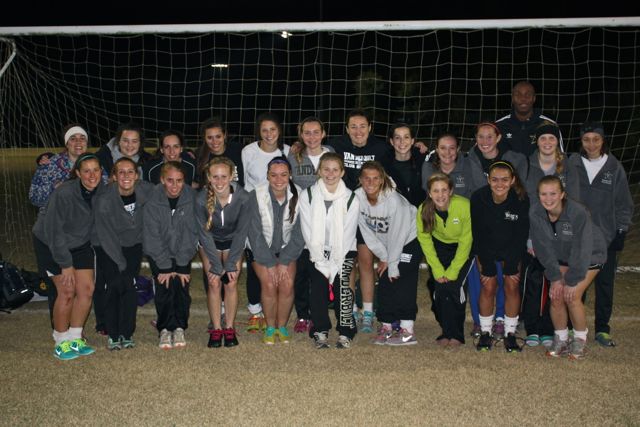 The tournament was particularly exhausting because not everyone on the team was able to attend the tournament (so less subs than usual), because it was FREEZING outside, and also because of the way that the tournament was scheduled–we had to play three games in one day with minimal recovery time in-between, and if you add in the game we played the night before, we played a total of 4 games in less than 24 hours.  If you combine that with the lack of subs, you get one tired group of soccer players.  It’s possible I’ve never been that exhausted in my life.  The results of the tournament weren’t ideal–we didn’t get the competitive seed at nationals, sadly–but it was still a very fun weekend of soccer and bonding with my team, and it was great to see my parents again so soon after Family Weekend! (Note regarding the national tournament: there are two divisions at nationals, competitive and open.  We go to nationals every year in the open division but were attempting to make it to the comp division this year (Don’t be deceived by the name, though–open is incredibly competitive too).)