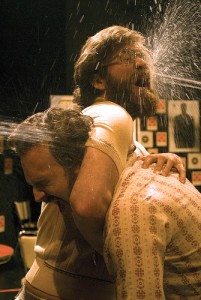 This past Friday night, my homework was to see one of Vanderbilt’s Great Performances, The Method Gun. Created by The Rude Mechanicals, the play was my first real experience with experimental theatre. I went in to Langford Auditorium with my expectations pretty low and am pleased to say that I didn’t hate it, although I didn’t understand most of it either.

The Rude Mechs are a company based out of Austin, TX who emphasize their ensemble nature. There were only five cast members in the show on Friday and I think it was written by one of them. In The Method Gun, there was definitely not a lead character, although the tiger stole the show (a tiger would appear after random scenes to tell the audience that every show would be better with a tiger because it’s a metaphor for life and death….).

The basic plot followed the lives of actors dedicated to The Approach and its leading advocate Stella Barden, who deserted the company for South America. Determined to perform A Streetcar Named Desire without the four main characters, the actors continued rehearsals for years after their abandonment, as we get glimpses of their techniques and interactions. Kissing practice and crying practice were pretty hilarious, as was all the weirdness that came of the tension in the group.

Though entertaining to watch crying, kissing, and arguing, the most enthralling aspect of the play was the actors’ glorification of Stella Barden. They felt so privileged to have learned from her and know that their lives will never be the same—similar to how I feel about my AP Biology teacher from high school, whose name was projected onstage at the end of the production. The cast had every audience member write down the name of a professor who inspired him/her, without telling the audience why, and later displayed every name on the list. This surprisingly sweet recognition of all the influential mentors was a wake-up call to anyone who had taken them for granted. I probably wouldn’t have developed a love of biology (and would have been one rec letter short for college apps) without Fred Holtzclaw, who I haven’t talked to in two years. The actors’ devotion to their mentor reminded the audience just how unappreciative we can be.

So while I didn’t understand the significance of the tiger, the swinging lights, or half of the production, I was still entertained and took away an important message from the show. All in all, not the worst theatre I’ve ever seen.