Last Friday, I had the privilege of attending Café con Leche at Vanderbilt, a Latin dance showcase that blew my mind.  My roommate, the lovely Angelica Lasala (Hustler newspaper writer extraordinaire), had been practicing fervently for this dance performance for a few months, so I decided to check it out.  Nothing like a little roomie support.

Café con Leche took place on Saturday, March 24th, in Langford Auditorium.  I was especially excited because the theme this year was “I Love Lucy,” and I would be lying if I said I didn’t completely identify with Lucille Ball’s ridiculously bubbly character.  I couldn’t find anyone to go to the show with me, so I ended up going by myself.  I met a few nice girls at the crosswalk, also going to Café con Leche, and they asked if I wanted to sit with them. So Vanderbilt.  I love this school.

This annual Latin dance performance showcases a wide variety of dance styles, both traditional and modern, that exhibit Hispanic culture.  There was something for everyone, including Samba, Hip Hop, Paso Doble, Meringue, Bachata, Mexican Folk, Tango, Cha Cha, Afro-cuban, Salsa, and Capoeira. My roommate was in the Samba, which was choreographed by a freshman friend of mine, and it involved lots of jumping up and down in costumes that were basically glorified swim suit tops and jazz pants with fringe.  I admired their brave costume choice. :)  One of my hall-mates was in the Mexican Folk dance, in which the dancers got to wear huge, swoopy skirts and constantly stomp their feet.  I was a huge fan. I was also fairly sure that a tiny person could have been hiding under one of the giant skirts, and we would have never known!

In the middle of the show,Vandy Taal, one of the numerous Vandy acapella groups on campus, performed.  My roommate is in Vandy Taal, so I was especially attentive.  They performed a rousing mashup of The Circle of Life and Waka Waka, so it was definitely a crowd pleaser.

Here it is, for your viewing pleasure:

VIDA, the Latin dancing group on campus, performed a number, which was extremely entertaining and cleanly executed.  Lots of the Latin dances were extremely intense and involved boy-girl partner work, including lifts.  A dancer myself, I appreciate when a boy is strong enough to hoist a girl above his head.  The costumes for all of the numbers were really fun with flippy skirts and fancy heels.  I would undoubtedly break my face if I danced in heels, and yet I still want to be a part of Café con Leche next year? It was that good, folks.

At the end, all of the performers came out one last time for a final bow and an invite to all audience members to come to their after-party at BB King’s downtown.  It meant so much to my roommate that I showed up, so that was super warm and fuzzy.  Samantha loves the arts, and so does Vandy! 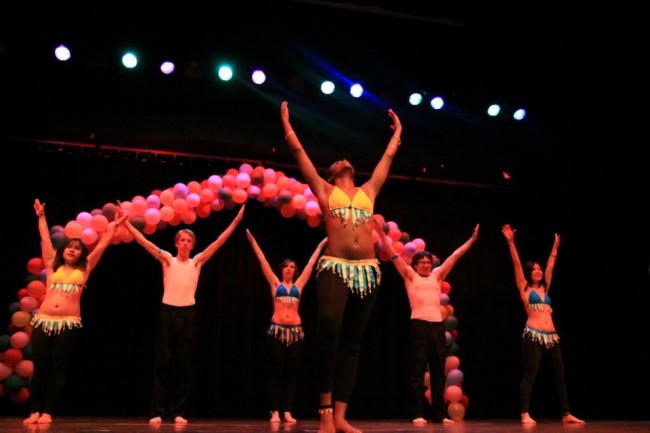