Hello everyone! I’m Yuqi, and I’m here with the first of many updates on my adventures at Vanderbilt! While I’m still shocked that there are only 2 weeks of school left (and then finals!!!), this also means that many cultural and performance arts groups have been fitting in their last events and performances in the past couple of weeks. This past weekend was particularly eventful, and checking out all the things that Vandy had to offer was not only a much-needed study break, but they really opened my eyes to the sheer talent and diversity of the students here.

My weekend began on Friday night when some friends and I went to see Vanderbilt Off-Broadway’s second spring musical, The 25th Annual Putnam County Spelling Bee. Having played violin in the pit orchestra for their first musical, Damn Yankees, at the beginning of the semester, I knew that this performance was going to be equally entertaining. Plus, I really enjoyed seeing some familiar faces on the stage and in the pit. (My friend Ryan not only played oboe, saxophone, and flute for the show, but also conducted the entire show!!) Right off the bat, the show was absolutely ~hilarious~ and I was dying from laughter at all the shenanigans going on on-stage. Even though the show was technically about a spelling bee, the story just had so much heart as the audience got a glimpse of the children’s journeys through not only trying to win the bee, but adjusting to issues with friends and family. In addition to members of the audience being called up on stage to participate, so many inside jokes were made about Vanderbilt culture (the Melodores, the meme page, etc) that made the performance so much more personable. Although I didn’t get to play in the pit this time, watching the show as an audience member was just as rewarding of an experience. And this almost goes without saying, but the singing was absolutely ~amazing~ and made me more excited about spelling than I’ve ever been in my entire life. 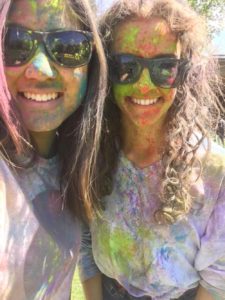 My friend Emily and I looking particularly colorful

The weekend got even better as I went to the Holi celebration put on by South Asian Cultural Exchange (SACE). Holi is a traditional Hindu spring festival filled with music, dancing, and, the most striking feature, the throwing of colored powders. Although I had seen pictures of Holi festivals in the past, this was the first time I got to participate in one myself, and wow, it was so much fun. I had been told by everyone to wear a white shirt so that all the colors can show through and I was definitely not disappointed – my shirt, shorts, face, and even the roots of my hair were all covered in powder after just a couple of minutes. It was so much fun throwing powder on my friends and getting powder thrown back at me – I got a mouthful of red powder at one point and I don’t even want to think about what my teeth looked like in that moment. Not only did we get to learn more about Hindu culture, but the entire event really made the inner kid within us come out through playing tag with friends and just enjoying all the people gathered together.

After an extremely interesting shower, I attended Sankofa, a performance by the African Performing Ensemble on West African Rhythm, which includes music and dance. A friend of mine from the Ultimate Frisbee team was performing in it, so a couple of girls from the team and I went to go support her! I really didn’t know what to expect, having very little experience with African drumming in the past, but it was such an eye-opening performance. There were six different parts, each with its own social significance and piece of history in African culture. Not only were the drums, gankogui (a bell-like instrument), and dancing styles extremely interesting, but the rhythm of the music was also unlike the vast majority of Western music. At the end, their professor (who also performed with the group) asked the audience to come on stage and taught us some of the dance moves! Even though I have absolutely no dancing skills, I was feeling so restless after listening to the performance that I had to go up on stage and join them, which ended up being an absolute blast. If any of this sounds at all interesting to you, guess what?? This is actually offered as a class (!!!) through the Blair School of Music and there were students on stage who have taken the class during all four semesters they’ve been at Vanderbilt! The class is open to everyone, not just Blair students, and I know I’m definitely inspired to take the class sometime in the next three years (:

Although I had to settle down on Sunday and finally catch up on all the homework that I had been neglecting, I’m so glad I took the time to experience all these wonderful events and really just appreciate the effort that these students put into organizing such amazing events for everyone. Moral of the story is: even though studying is important, it’s just as important to partake in the Vandy Experience while you’re here!

If you have any questions about anything I wrote above or just want to chat about other events that Vanderbilt has going on, please feel free to email me!!