A little bit of England in Nashville

Hidden in one of the many alleyways of Downtown Nashville, there exists a small pub where soccer fanatics can gather to experience a proper match-day experience.

Contrary to popular belief, Taylor Swift was not my first love. My first love was and still is: Manchester United Football Club. I fell in love with them when I was a wee boy and since then, our love has only grown stronger. The greatest strain in our long distance relationship has been the time difference. With Manchester United being located in England, they usually play their matches Saturday Mornings at 9am with the occasional 6:30am match. It’s a love and hate relationship as I love watching us play but I hate waking up early on Saturday. But alas, what is love without sacrifice?

Over my years at Vanderbilt, I have met others who share the same passion in the sport of soccer and as a result have discovered a relatively unknown secret: Fleet Street Pub. This pub is a small pub located in Printer’s Alley which is a small alley in Downtown Nashville that is home to the famous karaoke bar: Lonnie’s. Just across from Lonnie’s, you walk down a flight of stairs to be greeted by a Manchester United flag followed by the flags of many other English soccer clubs. Fleet Street Pub is an English style pub with only English import beers and English pub food such as Shepherd’s Pie and Fish and Chips. But the best part is that they open in the early mornings of when these soccer matches take place and they draw large crowds of other soccer fanatics so that they can watch their clubs on the big screen.

This past weekend, I took a trip down to Fleet Street to watch Man United play their biggest rivals, Liverpool. I brought three of my friends with me, two of them being Liverpool supporters, and we had a great time meeting other new people.

We arrived at 8am and the bar was already packed with other fans wearing their respective jerseys. Though the match did not end in our favour, it was still a great experience none-the-less. I highly recommend going over to Fleet Street as it’ll beat anything else you can find in Nashville on an early Saturday morning. 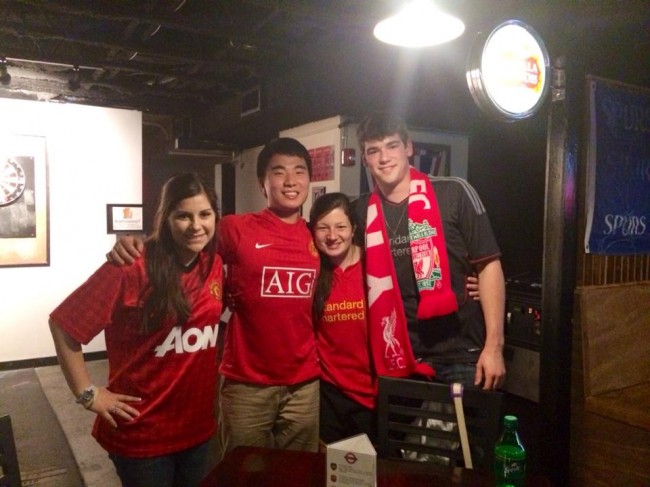