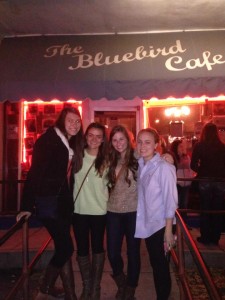 When I arrived at the Bluebird Café last Thursday, I had no idea I’d be seeing Kacey Musgraves, CMA’s Best New Artist, perform. The tickets advertised songwriters Michael Logan, Billy Montana, Steven Dale Jones, and Lucie Silvas. Little known to me, Silvas opened for Musgraves in the past so she wanted to support her friend. In fact, Musgraves’s grandmother and mother were also enthusiastically cheering in the crowd.

Let me back up. I went to the Bluebird with Caitlyn and a few other AOIIs for my Country Music class. Even though I’m a senior at Vanderbilt, this was my first time at the Bluebird. I’ve been wanting to go ever since the premiere of the TV show Nashville, which features performances at their soundstage version of the Bluebird almost every week. I was little surprised by the outward appearance of the Bluebird, because it’s in a crowded shopping center just past Green Hills Mall—not exactly where I pictured country music history being made. The inside was even more overwhelming, because the tables were packed close together and the walls were covered with pictures. For this performance specifically, the microphones were setup in the center of the room and all the tables surrounded them and faced inward for the “In the Round” feel. Once I sat down and adjusted to the lighting, though, the excitement hit me as the artists started introducing themselves and talking about what an honor it is to perform at the Bluebird.

Michael Logan kicked off the night playing guitar, harmonica, and singing. He was talented in all three mediums but his passion is what made the performances really stand out. Next in the circle was Billy Montana, who began by asking the crowd if they had heard of the TV show Nashville, so obviously I cheered very loudly. Montana then described a recent episode that involved two friends fighting over the song “What If I Was Willing,” which he wrote with his son, Randy Montana, and friend, Brian Davis. The song was upbeat and catchy, and I actually recognized it from a recent episode! The third artist of the night was Steven Dale Jones, who tended to slow down the tempo with ballads.

Finishing the circle was Lucie Silvas and her guitarist Derek Wells. Silvas was the only female artist in the testosterone-fueled circle, but her unique and powerful voice would have stuck out anyway. Though Silvas was born in London and raised in New Zealand, she sang without an accent and seemed to embrace the country tradition of baring all with her songs written about personal experiences, especially with “Letters to Ghosts,” and “Roots,” which was done a capella. When Silvas brought Musgraves to the circle, they sang an acoustic version of “You Got It,” by Roy Orbison, that had beautiful harmonies and sounded like they were sincerely trying to convince a loved one to stay, even though they were really reading the lyrics off an iPhone.

Overall, the experience was captivating and genuine. I felt like I heard real country music without the annoying stereotypes, not to mention I had my first celebrity sighting in Nashville!