While I have nothing against the other seasons of the year, my mind has been wandering to Spring the past few weeks, more specifically Spring break. I have spent a lot of time planning for one of the organizations I am involved in, Vanderbilt Alternative Spring Break. Here is what has been going on:

Day of Service: Every year, Vanderbilt has a weekend of service to commemorate the tragic events that occurred on September 11th, 2001. Vanderbilt Alternative Spring Break hosted a few service projects throughout the weekend. I spent my Saturday afternoon at the Second Harvest Food Bank. We helped sort and package the food donated to the food bank. Together we sorted 5,700 pounds of meat! The Day of Service was a fun way to get back into the ASB limbo and to introduce first-year students to the organization!

Site leader Applications: This past year I was a site-leader for an ASB site in Los Angeles. After having such a great experience last year, I decided to reapply. The application process was quite different this year. The application was all digital for the first time, and it was submitted through Vanderbilt’s online student organization database, Anchorlink. In addition, ASB launched a new website, which I used a lot to read about the different sites and finalize which trips I wanted to rank. After submitting an application and being interviewed, I was notified that I was accepted as a site leader for this year!

Site leader Retreat: The following weekend after being accepted as a site leader was the site leader retreat. The executive board and the seventy-eight site leaders spent a day on a farm in Franklin, Tennessee. It was during the retreat when I learned where I was going this spring break and whom I would be co-leading the site with. I’m happy to say I got my first choice in Detroit, Michigan! My co-site leader is Sadie, the coolest sophomore at Vanderbilt. I’m excited to work with Sadie the next few months as we prepare for the best spring break trip ever. In addition to meeting new site leaders, I got to spend time with people that I have gone on ASB trips with before. 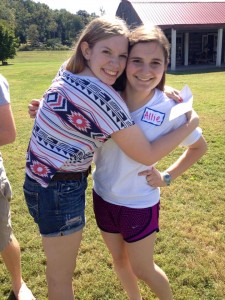 ASBBQ: The Sunday after site leader retreat was the barbeque and information session. We spent two hours outside of the Rand Dining Hall with posters for each of the 39 sites. Sadie and I told people about what we will be doing on our site and encouraged people to apply. There was a good turnout, and some parents even came because it was Family Weekend!.

Since these events, planning for ASB has been a whirlwind. My co-site leader and I recently found out who is in our group, and I can’t wait to write about them soon!