YOSO: You Only Scotland Once.

So after a 3 hour drive to Newark Airport and a 7 hour flight to Edinburgh, I made it to Scotland safe and on-time last Wednesday morning. My first observation: this city is probably the most beautiful city I have ever seen. Moving on… my first few days in Edinburgh were spent in my IFSA [institute for study-abroad] Butler orientation were I had the oppertunity to become informed about the various things that would come up during my semester abroad. This also became the perfect oppertunity to meet the other 60 or so Americans that were in my program as well.

After three days of orientation I moved into my flat this past saturday! It was not that stressful at all because my program provided busses that shuttled students to their dorm locations. I am very pleased with my flat for several reasons! It is in one of the best areas in the city with many restaurants, pubs, and the university near by, and it is also a very social dorm as well. I only have one flat mate who is also in my IFSA-Butler program which makes things great as well in terms of sharing the kitchen/common room/and bathroom. The nice thing too about my flat, and my program in general, is that they really try to integrate you into the University of Edinburgh. I am in a “dorm” essentially with Scottish students, and international students all in the rooms surrounding my flat. I have already met a ton of other students [both Scottish and not]!

This past week has been an absolute blur, probably because I am still a little jet-lagged. But I have done many wonderful things in this city already, and I have many wonderful things left to do as well! I have spent the past week really just trying to get settled and meet friends. The University also started class this past Monday. The system is so different from Vanderbilt/the U.S. in general. I am only taking 3 classes [they all count for 5 credits so I will come back with 15 Vanderbilt credits], but I am in class a considerably less time. I have one class on Mondays at 2pm, and two classes on Thursday at 2pm and 4pm. AKA I don’t have class on Tuesday, Wednesday, Friday, Saturday, and Sunday. For once I am finally going to have some free time! Another big academic difference that I have noticed is that students do not really buy their text books here. Instead they use the library like no other. That is because on the first day of class a professor will give you a 5 page reading list of all the suggested books. You are definitely not excepted to read them all, but you are expected to read a good chunk of the list in order to do well in the class. I guess they do not buy books because they would probably spend $3,000 a semester on all the books!!! Crazy stuff. Finally one HUGE difference in terms of academics is assessment. At Vandy, most of my classes will have a few homework assignments, participation grade, a few essays, and a midterm and final. At the University of Edinburgh two of my three classes have one final that makes up for 100% of my grade!!!!!!!!! The other class has one paper due at the end of February worth 30% of my grade, and then a final that is worth 70% of my grade. I am just a little overwhelmed by that. So on top of not ever having class, the first actual assignment I have is not due until a month from now. Students here are expected to be very independent and “teach themselves” most of the material in the class. I know that Vanderbilt has prepared me well for the academic challenges I might face here at Edinburgh, so I am not really that concerned.

Other than that I do not know what else to say! Kilts are actually quite common here as I will always see atleast five men sporting them in one day. I also tried vegetarian haggis at an international students dinner this past Saturday. Normal haggis is a mixture of ground up sheep-intestines, so I don’t think I would have had that anyways even if I wasn’t a vegetarian. But from my friends who ate it tasted better than it sounded.

Much more to come in the next few weeks! For now I am just going to leave you with a bunch of photos. 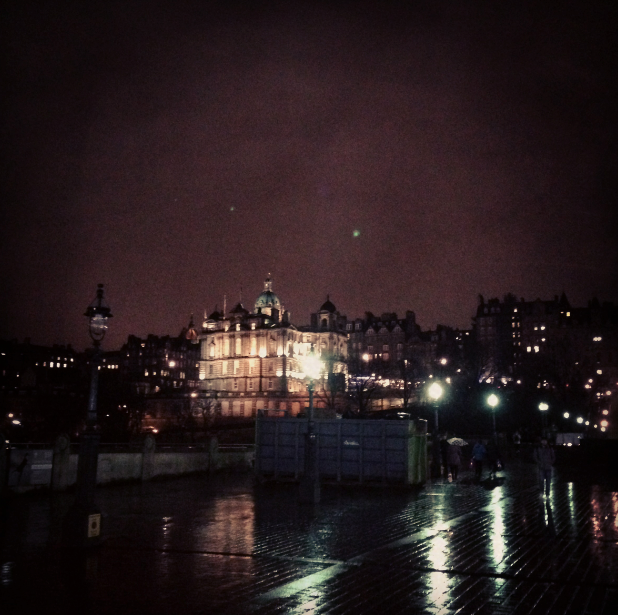 My new motto for the semester is YOSO: You only Scotland once.