Luckily, this past weekend was pretty much work-free and I got to enjoy hanging out with friends. That doesn’t mean it wasn’t busy, though, since I’m one of those weirdos who’s only happy when she’s busy. 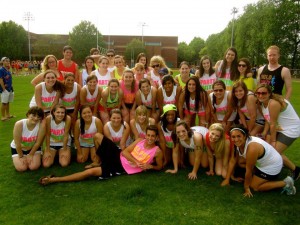 Right after class on Friday, I headed to the Rec fields for Derby Days flag football. Even though we lost our first game and were out of the tournament, we had so much fun! Seriously, every now and then, I kind of wish I was a boy so I could play football…but then I come back to my senses (haha). After the game, I showered and went to an “America” themed frat party, where there was a live band. I was a little skeptical at first since I don’t know much rock music, but I had heard most of the songs on Rock Band before and they even did a medley of Grease, so of course I had a good time.

On Saturday, my friends and I took a cab to Bridgestone Arena for a Vandy ice hockey game. It was the Annual I-40 Face-Off against the Vols, so while I cheered for Vandy, I also had to sing along to Rocky Top when the Vols scored. Vandy ended up winning 10-1 and one of my friends even scored! I forgot how intense hockey games can be, but it just got me excited for the Preds game this Thursday that my sorority is going to! 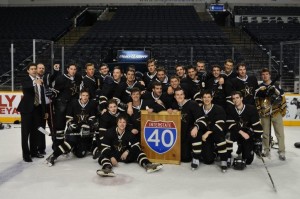 Later that night, my friend from Belmont picked me up and we drove to Green Hills to see 21 Jump Street. The movie was hilarious and it was great to catch up with an old friend.

Yesterday I had to get a little schoolwork done, but I still had time to get sushi at Zumi for dinner. Also, one of my favorite shows, Game of Thrones, came back on for season 2, so it was a good day. Just a typical weekend at Vandy!