I spent the last few days attempting to pound out a ten page political science paper, and I am happy to say that I finally succeeded!  As you might remember from my first blog post this semester, before this one I’d already written one ten-page paper, and as you may also recall, it wasn’t easy.  Even though I’m half-a-semester smarter, and four political theory texts more well-versed, this paper was just as difficult as the last one for me, if not worse.  The first night I worked on the paper, I definitely just sat there, staring at the computer, for over four hours.  A total of one page was written that night.  Just ask Victoria.

On reading day, and as you may have read in my last blog post, while I did work on my paper, I wasn’t necessarily the most productive person ever.  One more page was written.  So Friday night, when I got back to my room, I engaged “SelfControl” on my computer (it’s a program you can download that will block whatever websites you specify.  On my list are things like Facebook, Twitter, attackofthecute.com (I’m a sucker for a fluffy puppy), and YouTube, among others.) and five hours later, ta-da!  Paper written.  This just goes to show how distracting the internet can really be; it definitely makes a huge difference in my productivity level when I get rid of my main distractions. (I apologize for just linking you to every single website that causes me to be unproductive.) 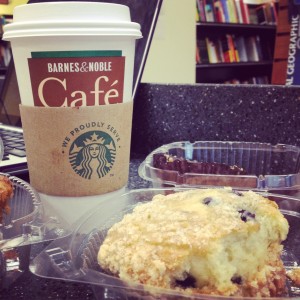 Yesterday I spent the entire day studying for my take-home French final, and revising compositions I had written earlier in the semester.  I turned SelfControl on for six hours, and by dinnertime, I had finished revising, studying, AND actually taking the test.  After a two-hour dinner-and-relaxation break (Chili’s to-go and The Office with Carly), I moved on to study for my Intro to Ethics final, which is tomorrow morning.  All in all, yesterday was probably the most consistently productive I’ve been in weeks, so I’m pretty proud of myself.  Now I’m sitting in Barnes & Noble with Victoria; studying, eating muffins, and drinking coffee; and all I’ve got left is my Ethics final and my Econ final, and I’m home free (literally).  Wish me luck!