A weekend of festivities

Though we have just entered finals season, this past weekend was fun and eventful. At the intersection of so many different holidays and celebrations, events throughout the weekend provided many ways to de-stress and enjoy the diversity in culture on campus. Regardless of individual culture or religious affiliation, the best part of campus culture is that all are welcome to the celebrations, so that we may learn from and celebrate each other’s diverse backgrounds. Overall, it was a super fun weekend!

I’m starting with this one, because I volunteered at the Nashville Earth Day Festival with SPEAR (Students Promoting Environmental Awareness and Responsibility), and Vanderbilt administration just released an official statement on Earth Day committing to transition to entirely renewable energy sources and be carbon neutral by 2050. I was actually part of a student-led movement to petition and spread the word about how important this commitment would be for the university, and after campaigning and getting over 3000 signatures supporting the movement, we were successful! It just shows how with determination, resilience, and getting support, we can make real change happen.

Though I am not very religious, my friend and I made it our yearly tradition since freshman year to go to Easter church service at Fellowship Nashville near campus, followed by Vandy Wesley‘s Easter Fest on campus. Easter Fest has a relaxed vibe with free food, t shirts, succulents, and other activities relating to the story of Easter. Everyone is encouraged to stop by regardless of their religion.

Vanderbilt has a sizable Jewish population, so Passover is a pretty big event. The largest Seder is hosted by Hillel, but other organizations, like fraternities, also host Seders throughout Passover week. Grins, the vegetarian and kosher restaurant on campus, also closes for the week in honor of Passover. Again, Jewish students will often invite their non-Jewish friends to participate in the traditions with them to celebrate together.

This Hindu festival of color, traditionally observed in Nepal and India, is held by SACE (South Asian Cultural Exchange) every year. Everyone is invited to participate in throwing vibrant powdered colors at each other, thereby spreading joy and making memories. Before the color throwing began, the Banghradores performed their competition set in honor of Vaisakhi, a Sikh festival, which was so amazing to watch. By the end of Holi, I was covered in color from head to toe, and I might have permanently stained my shower pink, but it was a day I will never forget.

The Vanderbilt undergraduate gender, sexuality, and intersex alliance hosted their end of year, finals stress relief event on Sunday, as well. They had a cute petting zoo with goats and other animals, as well as free treats and stickers. 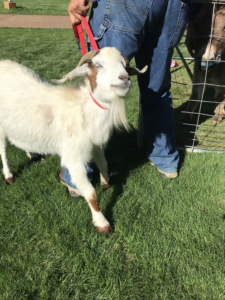