For the Love of Books

Is it just me, or has it become much harder to read for fun nowadays? With demands of rigorous schoolwork, extracurricular activity responsibilities, and life getting busier in general, it feels like we need to make more of an effort to practice certain hobbies. This post is in part inspired by a snippet of a conversation I overheard while eating lunch at EBI a few weeks ago:

Student A: One of my goals this summer is to get through this entire list (he either said 15 or 50) books. Check it out!

Student B: Dude! I don’t think I’ve read that many books my whole life!

I was fortunate enough growing up that I was encouraged to read voraciously not only by schoolteachers but also by my family. Since I am an only child, books were always a great way to keep my mind occupied especially when there weren’t other kids always around to play with. As a result, I’ve always tried to be an active reader, and though it was easy to make time for it in grade school, when high school started becoming more demanding, the only time to read was during breaks. College has been the same story, and thus breaks are extremely valuable as reading time for me!

Over this winter break I read 2 books! It looks like a small number, but compared to the 0 I read during the semester, I am quite satisfied with it. Don’t get me wrong, we read books for class and I read articles on the internet for my own pleasure, but usually with everything being so busy at Vandy I don’t have much extra time to read more than that. Here are the two books I read! 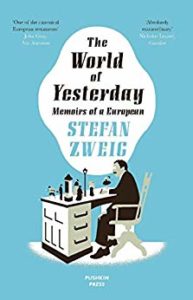 I picked up this book by Stefan Zweig during a brief stay in Vienna, Austria, last summer. Before traveling, I did a bit of research and learned that Zweig was the most renowned Austrian author, so naturally I had to read one of his works! In this collection of memoirs, Zweig recounts stories from throughout his life, providing personal accounts and perspectives on society at large. Sadly, he committed suicide during WWII, because he felt hopeless as a Jew in Europe and could not bear the suffering that would ensue. It was an interesting read, like having a window into someone’s mind who sees the impending doom of the war with no resolution. I also found it very interesting that some of his descriptions of society and humans were quite similar to today, even though Zweig wrote about seemingly so long ago (late 1800s, early 1900s).

This biography of Alexander von Humboldt was recommended to me by my dad, who was recommended it by his colleagues. Before reading this, I had no idea how important of a figure Humboldt has been not only on the natural sciences but also on the world at large. For anyone interested in history and the environment, I highly recommend this book! One of the main takeaways is that Humboldt combines a love of science and learning with interdisciplinary connections and emotive responses. For example, his descriptions of the South American natural landscapes include the scientific data as well as how it made him feel. It was Humboldt’s publications that inspired Charles Darwin and Simon Bolivar – what connections!

If you would like to exchange book recommendations, email me! deniz.gungor@vanderbilt.edu