Far from being a typical football jock, Sam’s persona on and off the field exudes the type of authenticity that draws people to him. Not only is he passionate about his sport, but also about music and film, all of which he can pursue here at Vanderbilt. Here are some highlights of my conversation with him! 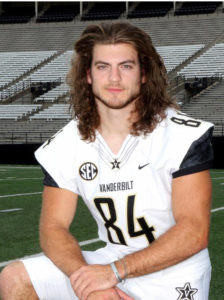 I started out engineering, actually, because I wanted to tie it into music production. I’ve grown up playing music, and started making music videos for fun in high school, then experimented with circuits by wiring pedals to have cool effects while playing guitar. But when I got to college I realized how tough the engineering curriculum was, especially as an athlete, and decided to major in film which is something I’m really passionate about.

Choosing to play football at Vandy:

My dad played football at Auburn, so football has been part of my family for a while and I’ve loved the sport all my life. I knew it was something I wanted to continue and I initially looked at Auburn, but chose Vanderbilt because of academics, SEC football, and its location in Music City. It really offers everything I could have wanted.

Ultimate goal is playing in the NFL. But as a back up, or later in life, I’d love to work in music video or film production. It would also be pretty cool to be lead guitarist in a band!

Football: depends on the day, but practices are 5-10 am most days of the week, plus other workouts and practice in the afternoons (=mucho time)

Challenges of being a student-athlete // how to balance:

Time management. Definitely have to use free time wisely because after hours of practice and class it’s tempting to just relax, but there’s stuff to be done!

Perks of being a student-athlete // Favorite things about Vandy:

I notice (and enjoy a bit) the attention from both people on campus and younger kids who’ve seen me play. It’s such a great feeling knowing that little kids see you as a figure to look up to, and I try to treat everyone the way I’d want to be treated, by giving that attention back to them: it was huge for me as a kid when an athlete I looked up to gave me a high five or something.

2 minute advice to a younger self / prospective student:

There will be ups and downs, and at times things won’t go your way, but just know that things happen for a reason.

Be yourself, don’t try to live according to others’ opinions or standards because in the end it’s your life and up to you how to live it.

Mottos: “If you’re not living on the edge, you’re taking up too much space” and “Do something you love each day” 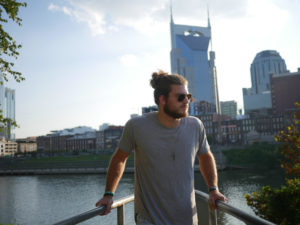