The first part of a two-part blog on traveling alone on a service-learning trip through the Nichols Humanitarian Fund, a trip I took in May 2017.

As always, I’d love to get an email from you! My email is sophia.druffner@vanderbilt.edu, and if you want to check out my other blog posts on sophomore and junior year, check out The 4 Things I learned Junior Year, and its companion, The 11 Things I learned Sophomore Year! 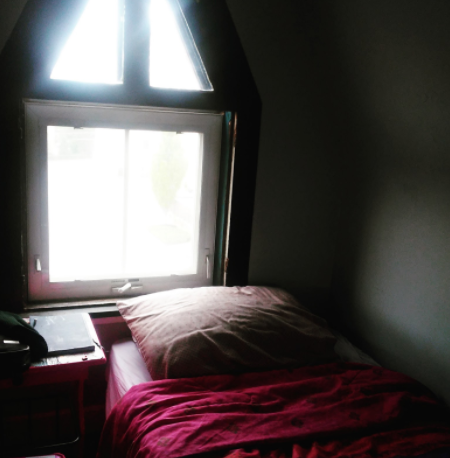 I’m staring out the window of my attic room, feeling a bit like the Little Princess. I’m living for the next three weeks in Conshohocken, Pennsylvania, and already, I can feel the difference. There’s so much quiet on the street… good for time to reflect on the plans that took so long to construct and validate, now gone.

I had originally intended to go to Camden, NJ to work with the Camden Coalition and the adjacent Lourdes Hospital to learn more about healthcare pre- and post-emergency room. But sometimes, a dime turns on its head and life changes. Plans have to adapt and evolve, emails have to be sent, and phone calls made. After feeling like a CEO with the amount of emails, texts, and phone messages (the last a medium I am unused to), I have a new plan. In the next few weeks, I’ll be shadowing and volunteering at Pennsylvania Presbyterian MICU, interviewing members of the Camden Coalition, and traveling to nonprofit organizations to find out more about the Philadelphia-Camden idea of preventative healthcare through service-learning and interviews. I’ll also be researching a monumental change in our governmental healthcare system, a reform to Medicare entitled the Medicare Access CHIP (Children’s Health Insurance Program) and Reauthorization Act, through a health policy professor at Rutgers University.

Amidst all the shattered expectations, I know two things. The first is that I’m going to fulfill the requirements of the Nichols Humanitarian Fund to make (and study) humanitarian efforts in my chosen field, which is healthcare. The second is that in every area of this project, I’m going to think about Catholic social teaching, something, as a Catholic, I’m trying to make more part of my life. Amidst all the shattered expectations, I feel a little more certain articulating my goals, for it’s only when you know where you are headed that you can start figuring out how to get there.

Catholic social teaching began with an encyclical, which is a publication written by a pope. Pope Leo 23rd wrote this famous encyclical in 1891, called Rerum Novarum, which roughly translates to “Of Revolutionary Change” and focuses on the rights of workers.(In my limited Latin, I initially read it “Of A New Thing,” but “Of Revolutionary Change” sounds much better and totally different than the ecclesiastical Church one typically thinks of). But this isn’t just the ecclesiastical church. This is the Catholic Church, and it’s revolutionary. From Mother Teresa working in the gutters in Kolkata, India, challenging the caste system to a young man in Italy ministering to prostitutes and helping them know their worth to an American woman living in a Mexican prison with thousands of prisoners, the Church is about reaching people where they’re at and walking with them. In the next few weeks, I’m going to process all my experiences through daily journal entries and online photograph posts in the light of what developed out of 150 years of writing and thought, the seven Catholic social teachings:

-Dignity of the Human Person
-Call to Family, Community and Participation
-Rights and Responsibilities
-Preferential Option for and with People who are Poor
-Dignity of Work and the Rights of Workers
-Solidarity
-Care for God’s Creation

I know that by the time I write my second blog post, I’ll have stories and examples from the service I have performed, the stories that I have listened to, and the many, many people whom I have shared time with. I’ll also know much more about the undercurrents of many of these experiences — the complicated world of insurance, which dictates where we go and how we are treated, changing our lives in a fundamental ways. Most of all, I will have learned more about the beautiful revolutionary change that I am a part of.

As I look out the window, noting the darkened evening light, I’m apprehensive of what the next three weeks will bring. I’m alone in this city, and the nearest relative — a grandfather I haven’t seen in years– is at least 100 miles away. All I have with me is my violin, my laptop, my phone, and a debit card. I look at myself in the mirror and try to see myself as an investigative, smart college student, but all I can see is someone who’s young and not sure of herself. But I have a plan, I have hope, and I have trust. And really, that’s all I need.