That Time I Ran Across the Football Field

The beginning of a new school year has always been an exciting time for me. A new school year means new classes, meeting new people, and most importantly, the beginning of football season. Now, I am not an expert on football by any means, but I know enough to honestly enjoy any game regardless of who’s playing. However, this post is not going to be a boring explanation on the rules of football but the excitement of Anchor Dash – a first-year’s very first football game at Vandy. I remember Anchor Dash like it was yesterday, for this was my very first college football game which made Anchor Dash even more memorable.

I received my Anchor Dash T-shirt the week of the first home game against South Carolina, and my excitement only grew. I told my parents that my 1,600 fellow classmates and I would be leading the football team onto the field before the game, and they set their alarms so that they could tune in to watch us sprint across the field.

Before the game, I met with my Visions group, and we walked to the Fieldhouse to eat dinner, which was free, before the game. Soon, all 1,600 of my classmates and I lined up to get ready for our first game. I remember walking towards the stadium and seeing the names and faces of past Vanderbilt coaches and players on the walls and realizing that I was standing in the middle of Vanderbilt athletic history. The next thing I knew, I heard the fans in the stadium screaming and cheering on the First-Years and saw the stadium open up in front of me. As I ran down the field, I looked up and saw my own face on the gigantic screen.  I had never been on the big screen at a sporting event, so this was another exciting first for me.

Even though I was out of breath after sprinting all 100 yards of the football field, I was grinning from ear to ear. At that moment, I felt that I was truly having the complete Vanderbilt experience. After Anchor Dash, I was ecstatic to be able to attend every other home game of the season (for absolutely free) and to scream “Let’s go ‘Dores!” at the top of my lungs. 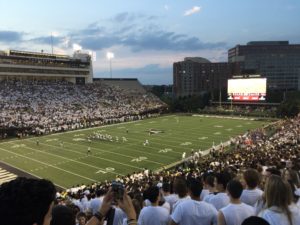