The month-long hiatus is over!  It’s been busy over here on the Blair side.  Just a few weeks ago, Blair students competed in two competitions: the Music Teachers National Association’s Divisional Chamber Music Competition and Vanderbilt University’s Concerto Competition.  Success prevailed!

Vanderbilt University hosts a Concerto Competition every year.  This year, there were nine finalists: 3 violinists, 1 violist, 2 cellists, 2 pianists, and 1 clarinetist.  A panel of four judges who were non-Blair faculty listened to these folks play in Ingram Hall, and it was a tough choice to narrow it down to three people.

I had so much fun playing in the orchestra concert last night.  Keehun Nam, a student conductor, led us in the Suite from Peer Gynt.  You don’t recognize it now, but you definitely know “In the Hall of the Mountain King.” Then each of the winners of the Concerto Competition blew us away with their incredible virtuosity and phenomenal performance.  Alex Krew, a senior in the 3+2 Blair-to-Owen program, started off the soloists with the first movement of Shostakovich’s Cello Concerto and made us excited for Russian music.  Senior Ben Hummel, on the violin, performed the first movement of Korngold’s Violin Concerto.  This was romantic and flashy and very beautifully performed.  To wrap up the soloists was sophomore Luke Ferraguti, who evoked so many different characters in the first movement of Prokoviev’s Piano Concerto.  I think I might have been grinning the whole concert, it was just so exciting and wonderful to witness our peers perform at such a high level. Then we ended our last concert of the year with the winner of the Composer’s Competition, Alex Commanday and his work, “Embarkation,” which was a cowboy-sounding, rhythmically intensive piece that was also really lively and exciting to play. 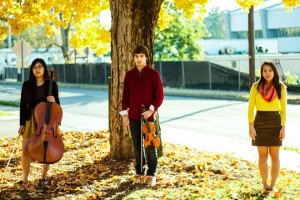 Also in the Blair news, our piano trio consisting of Matt Lammers, Marissa Uchimara, and me, went to Chicago in mid-March to compete in the chamber music division of the MTNA National Competition.  This was the third round, after the state and divisional competitions, and we placed third.  It was a wonderful experience, getting to play for the judges, who were big pedagogy names in the music world, meeting Matt and Marissa’s parents, and getting the music to such a high level.  While we were staying in the Downtown Marriott, we got to explore the Magnificent Mile, including our favorite store Anthropologie, and eat at exciting places like Eataly, Yolk, and Wow Bao.

There you have it, folks, Blair kids making it big.