The Drive to Miami

Yesterday was a pretty long day. My sister and I were up at the crack of dawn to drive from Nashville to Miami. We did it all in one day and it took us just over 13 hours. I picked her up from Commons and we were able to use her breakfast meal to get coffee and muffins for breakfast. We survived the drive without getting a speeding ticket, and we got to stop at Chickfila for lunch, which was really exciting considering the closest Chickfila is fifty miles for us. We had many hours to reflect on our semesters and plan for the next one- all while taking in TN, GA and FL.

Here is a small part of my reflections:

This semester was such a whirlwind. I spent the first half of the semester traveling. Mostly for good- I had a few medical school interviews. I unfortunately had to come home for a few sad things too- there were a few deaths in my family. Everyone from my friends to my professors was extremely supportive. My friends helped me emotionally and my professors were accommodating with my coursework.

I also had a lot of fun! I hiked at Radnor Lake and I ran a 5K for charity and I even took a few classes at the Student Rec. Just this past Wednesday, my friends and I took Power 90, which is a girls only class. Every week, we do something different and this week the cardio portion was themed, ‘Crazy Dance.’ I guess the instructor knew that we were all delirious from finals and took advantage. It was the highlight of my week for sure.

Even with all of these exciting things going on, I still managed to study a little. I took such interesting classes. My favorite class was probably Don Quixote and Experimental Fiction. We read 7 novels, 1 play and a bunch of short stories after we read Don Quixote. After this class, I feel a little more cultured and worldly. I also did a three-credit independent study course in Communication Studies. I chose to study President John F. Kennedy and investigate why he has become a rhetorical model for so many despite his short public life. I analyzed six of his most well-known speeches and I learned so much about his background and private life.

Although the snow was beautiful, I was pretty excited to get back to the beautiful beach at home. Overall, I would say that this semester was quite successful. I am so sad that I only have one semester left, but I can’t imagine it being anything less than spectacular. 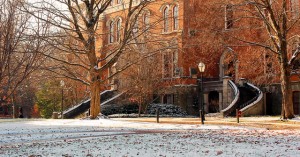