Guest Blog: I Hear Music in the Wind

(To spice things up, here’s another perspective about life at Vandy. My dear friend and fellow Vandy student, Nikki Farmer, writes about her first year here at Vanderbilt!) 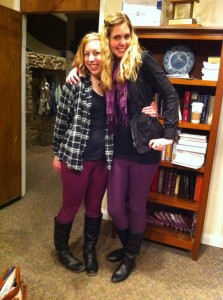 “I hear music in the wind” is the opening line of a cliché choir song I sang in middle school. Despite the cheesiness of it, I always thought it was a beautiful idea—I never imagined it would become my reality. Walk down Broadway on any night of the week and you will hear live music blaring from every bar and restaurant. They don’t call Nashville “The Music City” for nothing―music is the heartbeat of this town.

As I sit here, at the end of my freshman year, I have been thinking about the highlights of my first year of college. Many of them revolve around music. My music adventures began in September when the girls of West 3 donned our best and hit up the symphony. We got off the bus on Broadway and were suddenly surrounded by a cacophony of music—a country song from one restaurant, a classic rock song from another, etc. Then, a short while later, my ears were soaking in the beautiful sound of the Nashville Symphony playing. That night a world of music opened up for me and that was all it took to get me hooked on the music scene.

Around Nashville, you will find guitar-pick-shaped signs indicating a live music venue. I have made it my goal to go to as many of these as possible. So far, I have been to four and each one has had its own appeal. Marathon Music Works and Third and Linsley both had an underground music scene sort of vibe to them. As I soaked in the sounds of Joshua Radin, A Fine Frenzy, Bombadil, and The Last Bison, I couldn’t help but think that this is what Nashville is all about—bands playing the small venues until they make it big. Once they make it big, you can see them playing at Bridgestone to an arena of thousands screaming their name as I witnessed at the Maroon 5 concert. You can also find the big names in music playing at the Ryman to a smaller, more intimate crowd in an atmosphere that is unparalleled in any other venue. If you ever get a chance to go to the Ryman, GO!

But you don’t even need to leave Vanderbilt’s campus to get your fill of good music. You can go to the (FREE!) Blair concerts, hit up a Melodores performance, jam out at Quake or Rites of Spring, or a huge variety of other music events that are “on the card” and don’t require any form of transportation to get to!

When my brother came to visit me over Thanksgiving Break, he asked me what fun things we could do while he was here. My immediate response: “Something…anything music related!” We spent the day exploring Third Man Records (created by the renowned Jack White) and Grimey’s Record Shop. We finished off the evening at the Bluebird Café listening to some of the world’s most talented songwriters sing, play, and joke around while I sat in awe thinking, “this is Nashville.”