Posted by Rachael Grenfell-Dexter on Tuesday, February 12, 2013 in General Information. 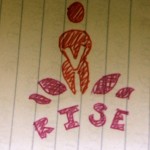 I, like many foreigners I know, am always surprised by America’s ability to transform holidays into commercial opportunities. Don’t get me wrong, on Valentine’s Day I will be baking heart shaped cookies filled with some sort of caramel chocolate interior to hand out to my kindergarten nutrition class (that sounds counter-intuitive, but it’s a holiday!). I will most likely be licking my lips for a taste of some raspberry flavored dark chocolate concoction or pining after one of Provence Bread’s heart shaped strawberry macaroons. Clearly, I have already though too much about it. But, this Valentine’s Day I want to put a spotlight on the One Billion Rising Campaign.

Eve Elser is a famed screen writer and the founder of V-day, a annual campaign that takes place on Valentine’s day to promote the end of violence against women. This year’s campaign is different; its a campaign that is the culmination of the world’s outcry against acts of violence against their women. From the uncompromising December protests in India to the widely attended funeral of a South African child gang rape victim this past week, it is clear that the world is on their feet. On Valentine’s Day, we will be dancing, celebrating the bravery, praying for the improvement and starting a revolution, in any way that we can, to raise awareness and inspire action to fight this atrocity.

It is something Vanderbilt strongly believes in: this year, freshman read Half the Sky and the writer, Nicholas Kristof, came to speak to students this past month. Everyone can do something. Whether you’re a Singaporean professional dancer or Mahlala, there is a difference that can be made. So I hope you will join us this February 14th and stand…or dance!