Posted by Rachael Grenfell-Dexter on Sunday, September 30, 2012 in General Information. 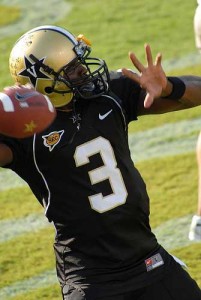 Part 1 of a series of my “Cultural Shocks” as an international student at Vanderbilt:

When first arriving in the US, being an international student, I knew there would be a few things that would befuddle me. Yes, a few things that I might tilt my head at and then, just attribute to the rift in cultures that I am a part of. But, something this week magnified that head tilt into a massive, achy, neck “hang” motion….it’s difficult to describe, but bear with me…

I usually try to stray away from conversations that are Football related, because as soon as I engage the other conversant becomes increasingly aware of my incredible ignorance concerning the game. All I know is that people have to ram into each other, and it can be people who are not holding the ball (this was particularly confusing because it is unlike rugby, a sport I am a tad..but not much more..familiar with, in this sense), and get points. As my brother always says to me when explaining anything sports-related, ‘the point of the game is to win’. You can judge my lack of knowledge but it is on this foundation that I have gone to Vanderbilt Football games (which are a sensational experience) and cheered my fellow ‘Dores on.

But this past week I learned something quite peculiar sports related: Fantasy Football. I overheard the words “fantasy team”during my job orientation at the Calling Center: my supervisor mentioned that he needed to check on his fantasy team to make sure that they were still doing okay, based on the scores from that day. I, confused, asked what a “fantasy team” was. He proceeded to introduce me the microcosm world of fantasy football where people created their own simulations of football teams and played against each other in the make-believe world. As my eyes got wider and wider with a mix of confusion and amusement, he laughed and remarked, “You are probably thinking: Weird Americans!” And I am not going to lie…I was.

As I walked back to my apartment from my job, I overheard men complaining to each other, “Tom Brady totally messed up my chances of winning” and “I wish I hadn’t picked him during the rounds”. Amused, I smiled; it was funny that the world made so much more sense now. Before, I was confused when I heard such comments. Only America could come up with something like that! But, I say that in the nicest way possible. Ever since I have been here, I have witnessed America’s unique manner of creating community amongst themselves and inspiring a sense of belonging. Only America could make young men sound as if they were owners of a football team…it is this odd mechanism of making everyone feel like they are a part of something special. Personally, I find it quite inspiring, if not, at least, a little hilarious.