A Vacant Room, an Occupied Vanderbilt

My roommate is a prominent member of Occupy Vanderbilt. So, is she still my roommate? Of course! And I couldn’t be more proud; they’re doing some awesome work!

Beginning in mid-March, a group of ambitious and passionate Vanderbilt University students, alumni, faculty, and supporters set up camp in front of Kirkland Hall, Vanderbilt’s administrative building, to form a “leaderless democratic decision-making assembly.”  Their aim is simple: increase transparency, foster discourse, create change. It has been over a month, and Occupy Vanderbilt has grown in numbers, enthusiasm, and creativity. 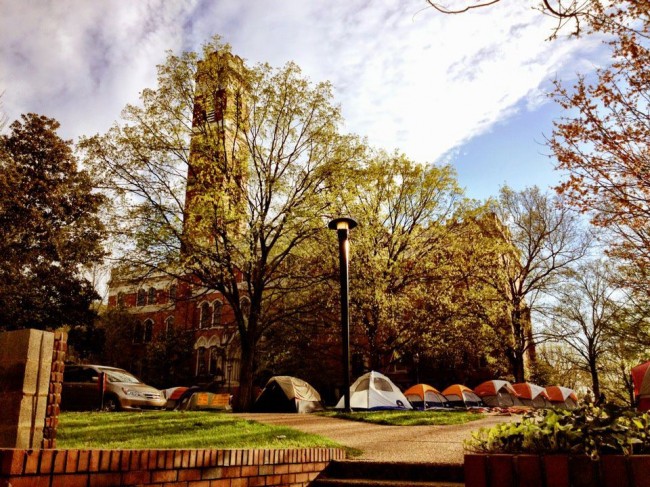 Though I may not be a camper myself, my roommate is; I get to hear first-hand about Occupy‘s latest meetings, rallies, and endeavors.  She often disappears to the campsite for days–fighting the good fight–only to return for school books and the occasional shower. Sure, it gets lonely, but I’m far more proud of her bravery than consumed by my loneliness. 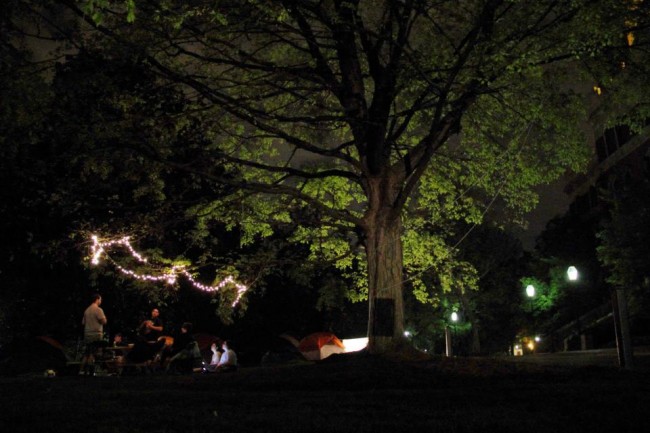 According to their description, Occupy Vanderbilt proclaims: “We want a university that uses its resources to create greater equality in the world, not to replicate the inequalities which exist today.” An eloquent and succinct declaration of their goals. They have three main objectives: “(1) End poverty for all workers at Vanderbilt. (2) Invest our 3.4 billion dollars in endowment in a socially responsible manner. (3) Give community members a real voice in all decisions which affect them.” To make their presence and missions known, Occupy has been known to interrupt the meetings of Trustee members, administrators, and convention attendees. Unafraid to approach the seemingly “untouchable,” Occupy Vanderbilt doesn’t hesitate to advance toward even the Chancellor himself. All power to them; they have more guts than I do!

Occupy has held teach-ins, attended rallies, passed out flyers and newspapers (check it out!), and met with various members of administration to see that these goals are followed through. So far, the successes of this group are astounding, and I am most impressed by their dedication. Even after a few less-than-kind run ins with students and faculty alike, Occupy has held strong–discovering new ways to reach their audience and influence the community as a whole.

Though my double may often be a single, I ultimately don’t mind. My best friend is working to make this campus a more just, undisguised, generous example to the community.
Always seek transparency in whatever institution in which you find yourself. Do not be afraid to seek all facts. Things may not be as they have always appeared to be.