The Dores played so well, and their win is a testament to their stifling defense. The Wildcats did not make a field-goal in the last 8:04 of the second half. The number one team in the country just couldn’t score on us. It was awesome to watch.

After the game, Coach Stallings sat on the bench with his head buried in a towel. John Jenkins ran into the stands to embrace his parents, who traveled to New Orleans for their son’s probable last SEC tournament. The rest of the team celebrated on the court with confetti and cheers.

From here, the Commodores head to the Big Dance. They will be seeded tonight and games begin on March 16th. Second round play will actually be in Nashville at the Bridgestone Arena. Hopefully, Vandy will be lucky enough to play in front of a hometown crowd.

In other news, I just got back to school from spring break. I spent the week at home with family and friends (including some of my Vanderbilt friends!). More on that later, though! For now, I am going to celebrate our SEC champion Commodores! 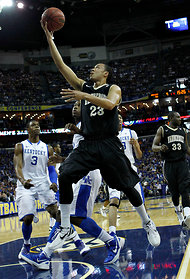