I went to boarding school, so this year is my 5th year living in dorms.  I know that may sound like a scary thought to some, but they’re really not that bad. I promise. When someone thinks about dorm living, most people immediately think about those horror stories they’ve heard where someone gets put in a single with three other people and had to stack their beds on cinder blocks to fit the desks in the room.  I promise, the reality of dorm living is not nearly as bad as it’s usually made out to be. Take it from me because after my extended time living in dorms, I’ve seen it all.

The worst living situation I’ve ever had was my sophomore year of high school.  I lived in a day-student single, which meant that the room was big enough to have two beds and two desks, but since one student was supposed to live locally and go home at night, there was only one closet.  However, that year, my roommate Kate and I were both boarders, which left us with an obvious dilemma: we had one closet for two people. We ended up avoiding disaster with a quick trip to IKEA for a few extra dressers. Problem solved! To this day, Kate is one of the best roommates I’ve ever had and I loved my first year at boarding school. (See our room below)

I promise you that the housing office won’t ever put you in that type of situation at Vanderbilt.  Especially as a freshman, compared to boarding school rooms, any dorm you could possibly live in on campus is nothing less than ideal.  Yes, dorm living doesn’t always rub people the right way because “expansive” or “roomy” aren’t necessarily terms people use to describe any college dorm room, but by the end of the year I think everyone is a little sad to move out–you get kind of attached.

Although I love the upperclassman living options–5 person suites (with kitchens), doubles or singes in Towers (1, 2, 3, or 4), studio or suite apartments in Morgan and Lewis, 8 person separate houses called Mayfields (for sophomores), 4 person apartment suites (with kitchens) called Chaffins, and so much more–there is nothing quite like Commons.

Freshman year, I had a single, which I loved simply because of the privacy it provided to me.  Of course, there are advantages to having a roommate, namely that you have someone to hang out with in the first few awkward days at school.  On my floor in West House, there were four triples, five singles and the rest were doubles, so I wasn’t faced with a hall full of singles where no one left their rooms and everyone was antisocial.  I had a fairly diverse hall; there were many girls who went out a lot but also a lot of girls who didn’t.  So, on any given night, the dorm was generally pretty quiet and I was able to get work done or hang out with people on our hall or go out with a group of girls if I was feeling it that night. 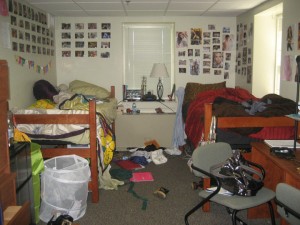 This is a picture of my neighbor’s room last year.  They had one of the biggest rooms on the hall (it continues back behind where this picture was taken–they had two large closets, two dressers and a small TV in this room).  Even though I loved my private little single, this was the room that all of my friends liked to hang out in.  It’s a little messy in this picture (and it always sort of was), but it certainly had a lot of character and we all miss it!

If you’re scared of dorm living–I’m not going to lie to you–it will be an adjustment.  However, your parents did it before you and their parents did it before them and I’m doing it right now.  There might be a year that you have a smaller room than others or an annoying roommate/hallmate, but that’s all a part of the experience, which is all worth it in the end.  This is the only time in your life that you will be on your own, away from your parents, surrounded by people who are close in age to you and at the same point in their lives as you.  Take advantage of it and always try to make the best of things!

For girls, think of it this way: you’ll have all your friends’ closets at your disposal just a few doors away and you can borrow anything you need and, of course, when you all come back from breaks and they have new clothes, you have new clothes! For guys: you can play Xbox with your friends in person on that massive TV you’ll inevitably have that will take up half your room and all of your desk and if you don’t have a game, someone else will nearby.

Here are a few pictures of Hank Ingram, the largest dorm on the Commons so you can see what the freshman dorms are like!