Last weekend I went on a trip with several of my friends who are in Concert Choir with me. Each fall we take a trip to Gatlinburg, Tennessee for a weekend. We rent a cabin and spend the weekend getting to know one another through a wide variety of fun activities.

On Friday afternoon we all drove to Gatlinburg, which is about 4 hours away from Nashville. While we were waiting for everyone to arrive we spent time hanging out with one another. Once everyone arrived we played a few get to know you games as a full group, including “Do You Love Your Neighbor” a choir tradition that is best described as being similar to Musical Chairs. After that people were free to do whatever they wanted around the cabin. Most people chose to go into the hot tub on the back deck of the cabin or to play pool and foosball.

On Saturday we were all given the option to participate in a multitude of activities throughout Gatlinburg. A lot of people chose to go on a short hike near the cabin, while others went shopping in downtown Gatlinburg or just stayed at the cabin to watch football on the big screen TV. The group I was with chose to go play mini golf. The place we went to was called “Hillbilly Golf.” You were taken up the side of a mountain on a lift, and you worked your way down the mountain as you played. It was so much fun! Later that evening we went into downtown Gatlinburg as a full group and participated in a photo scavenger hunt. We had to do a bunch of crazy things including proposing to a stranger, posing as a mannequin in a window, and singing the Alma Mater to people sitting outside a restaurant. After that we had dinner together and went back to the cabin to watch movies together.

My choir’s trip to Gatlinburg was a great way for me to get to know the new choir members, as well as strengthen my friendships with old members. It was also a nice way for all of us to get off campus for a weekend and experience more of the great things the state of Tennessee has to offer! 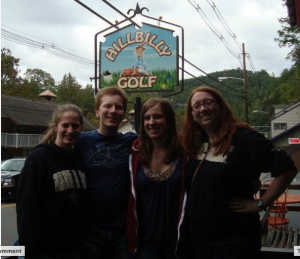