Summer in the City

Summer in Nashville is hot. In fact, the only thing hotter than summer in Nashville right now is . . . Nashville itself. Lately it seems like every single hot list includes Music City. Travel + Leisure recently named Nashville one of the “Best Places to Travel in 2014” and Condé Nast lists Nashville as one of their 2014 “destinations you don’t want to miss out on.” A great story in the Wall Street Journal earlier this month outlined “A pitch-perfect long weekend in Nashville” covering everything from hot honky-tonks to haute cuisine.

It’s true, Nashville is a great place to visit – but it’s an even better place to live.  When you live here, you don’t have to try to squeeze in all of Nashville’s fabulous offerings into one long weekend. You can explore great neighborhoods like 12th South or East Nashville, or see where you can go on the Nashville bus system. Students have the added advantage that many of Nashville’s offerings – like the bus system – are free or discounted to students.

Whether you’re coming to Nashville for a campus visit, getting here early for first-year move in on August 16, staying on campus for summer research, or you’re in the city for some other reason, here is a list of summer happenings that are helping to keep Nashville hot. 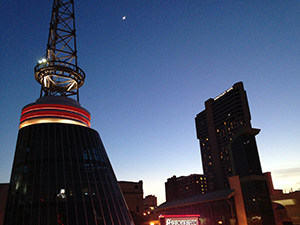 Theatre – As You Like It
August 14 – September 14
Shakespeare in the Park, by the Nashville Shakespeare Festival