Hello readers! We hope you’ve enjoyed your holidays and want to wish you a very Happy New Year. 2012 was certainly an exciting time to be a Commodore ­– no matter which slice of the community you consider – and we look forward to 2013 with great anticipation.

Of course, one milestone the new year will bring is the entrance in August of the Class of 2017 to The Martha Rivers Ingram Commons and Vanderbilt as a whole. This phenomenal class is still coming together (Early Decision II and Regular Decision application deadlines will be here on Thursday, January 3, of this week), but the Early Decision I crew has already been admitted, and we’ve enjoyed sharing in their excitement as they’ve shared photos, tweets, Facebook updates, and more since receiving admit letters in recent weeks. We’ve catalogued much of this Black and Gold pride into a Storify that enhances the Class of 2017 narrative, as social media once again tells a story we couldn’t possibly tell ourselves. We hope you enjoy it as much as we have. 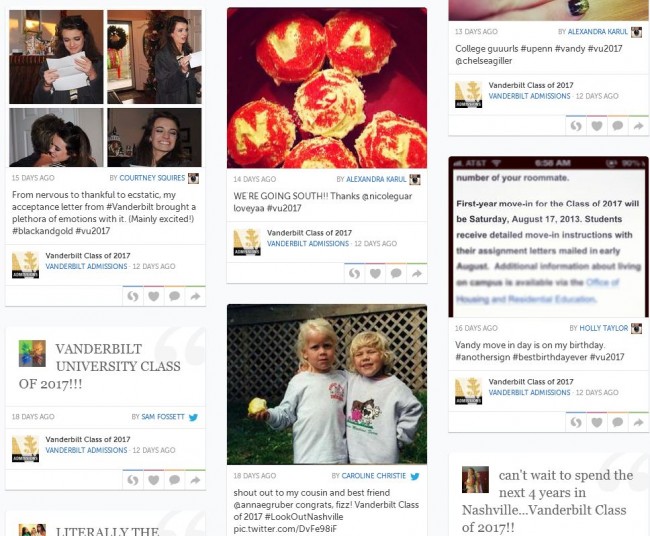 One final note: The Office of Undergraduate Admissions will be closed in observance of New Year’s Day tomorrow, January 1, 2013, and will re-open during normal business hours on January 2.

Again, Happy New Year and congratulation to the newest ‘Dores.