Last fall, head coach James Franklin and the football Commodores spent most of the season breaking records: The ‘Dores played in two consecutive bowl games for the first time in school history, earned the most SEC victories since the 1935 team, and ended the year with the longest winning streak in the conference.  Needless to say, the 2012 football season was a tough act to follow.

Fortunately, head baseball coach Tim Corbin and his players (affectionately known by Commodore nation as the Vandy Boys) were more than up for the task.  Corbin and Co.’s own slew of records actually began in January, when the ‘Dores were ranked #2 in Baseball America’s preseason poll, the highest preseason ranking in Vanderbilt history.  Vanderbilt also landed the #1 recruiting class for the second straight year.  By the end of January, the team had already enjoyed some national attention when ESPN published a profile on Vanderbilt program’s rise to “national elite” status.

Finally on February 15, we got the chance to see the Vandy Boys in action as they opened the season with a victory over Long Beach State.  One might think it would be difficult, if not impossible, to live up to the hype of such a dominant preseason reputation, but the ‘Dores (forgive my pun) knocked it out of the park every week for the next four months.  On May 12, Vanderbilt clinched the regular season SEC title by sweeping Kentucky in Lexington, and the next day they had risen to #1 in all five major national polls.  A victory over Alabama the next week topped off a 14-game win streak and set a new school record for most wins in a season with 47.  Two games later, the ‘Dores earned their 26th SEC victory of the year, breaking the standing conference record of 25.

Vanderbilt ended the regular season 48-7, 26-3 in the SEC.  After falling to LSU in the conference tournament title game, Vanderbilt was named the #2 overall team in the NCAA tournament and would host the Nashville regional at Hawkins Field.  At the end of May, seven Commodores earned SEC honors, including SEC Player of the Year Tony Kemp, and Coach Corbin was named SEC Coach of the Year.

On June 3, Vanderbilt won the Nashville Regional with a resounding 7-1 victory over Georgia Tech, before being edged out in the Super Regional the next week by the Louisville Cardinals.  At the post-game press conference, Coach Corbin spoke not of the excitement or the glory of the season, but of the honor and respectability of his graduating seniors: 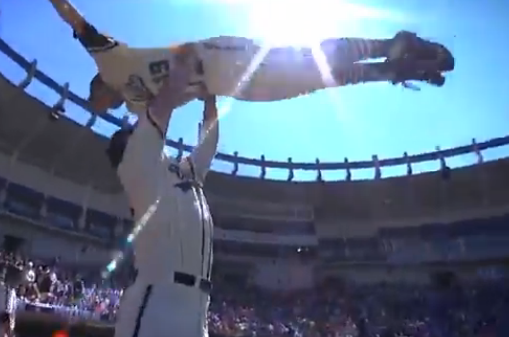 (That is not to say, of course, that the Vandy Boys do not know how to have fun.  The team earned a reputation throughout the season as a group of young men who achieved great things, while never taking themselves too seriously.  Don’t believe me?  Check out this Commodore dance-off, the ‘Dore’s take on the Harlem Shake, or a compilation of baseball shenanigans.)

The season may be over, but the accomplishments of these remarkable players continue.  Just last week, three Commodores were named All-American by Baseball America, with Tony Kemp earning first-team status.  Kemp joined Kevin Ziomek, Conrad Gregor, Connor Harrell, Spencer Navin, and Mike Yastrzemski as the Commodore’s 2013 draft class, so look out for these guys in the pros!

In the meantime, Coach Franklin and his football ‘Dores will open the season against Ole Miss in exactly 72 days, and I think it’s safe to say they have some pretty big shoes to fill…