Hey there, sports fans!  I know it’s been a while since we updated you on the progress and successes of our Commodore student athletes (what with that whole “admitting the newest freshman class” thing), but a lot has happened in the last few months!  Now that reading season has come and gone, I finally have the time to obsessively peruse the VU athletics website for the latest news, and I have compiled below a few highlights from the 2013 spring semester.

Basketball:  After a rocky start to the season, the men’s basketball team made a strong run in the SEC tournament in March, only to be edged out in the semifinals by Ole Miss.  Despite missing postseason play, Head Coach Kevin Stallings said of this year’s squad, “This basketball team may have improved as much as any I’ve ever coached over a single season.”  The women’s team finished with a 21-12 record (9-7 in the SEC) and advanced to the second round of the NCAA tournament before being knocked out by Connecticut.

Bowling: Vanderbilt students have a love for women’s bowling that not many other people truly understand.  The bowling Commodores won the NCAA championship in 2007, giving the university its first national title.  This year’s team proved that 2007 was no fluke, as the ‘Dores fought their way back to the championship match before being edged out in the final game.  The team finished the season with a #2 national ranking and has recently announced their newest signees for the 2013-14 season. 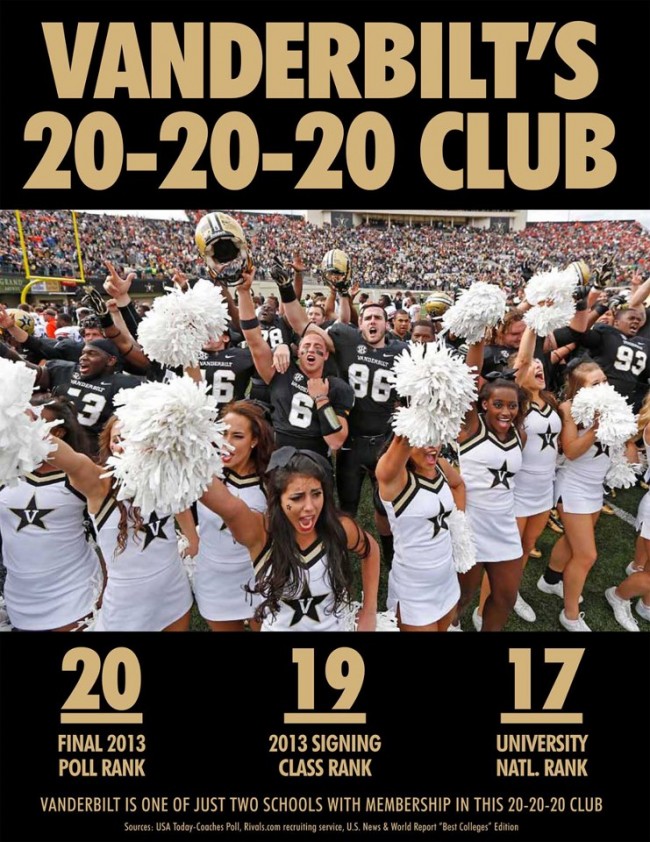 Football:  The annual spring football Black and Gold Game took place on April 13.  Head Coach James Franklin and crew put on quite the show for the 14,000 fans in attendance, as the game remained close down to the wire and ultimately came down to the final plays.  In the end, a 25-yeard field goal by rising senior Carey Spear sealed the victory for Team Black.  At halftime, Coach Franklin was given the Tennessean of the Year Award by the Tennessee Sports Hall of Fame, marking the first time a Vanderbilt coach has received this honor.  A couple of weeks later, senior running back Zac Stacy and senior offensive lineman Ryan Seymour were drafted by the St. Louis Rams and Seattle Seahawks, respectively.

Baseball: The success of last year’s baseball Commodores, as well as the strength of this year’s incoming class, earned the team a #2 preseason ranking, the highest in school history.  Not long after, ESPN posted this article about Head Coach Tim Corbin and the program’s rise to an elite status on the national stage.  The ‘Dores currently boast a 41-6 overall record (21-2 in the Southeastern Conference), which includes a 14-game win streak and 5 SEC series sweeps.  A victory over No. 15 South Carolina last week clinched their 12th series victory of the season as well as the SEC East division title.

Make sure to follow our baseball ‘Dores as they begin to wrap up the regular season with their final conference series against Kentucky (May 10-12) and Alabama (May 14-18), and remember it’s never too early to start getting excited for our football season opener against Ole Miss on August 29 – that’s only 113 days away!