Not an Ivy in the South

Posted by Kylie on Tuesday, November 2, 2010 in General Information.

Vanderbilt is not an Ivy League in the South.  No, I’m not going to be one of those naïve jerks who tells you the Ivy League is just a sports conference.  I understand it means more than an athletic schedule.  Wikipedia (the authority on all things pop culture) says the Ivy League has a “connotation of academic excellence, selectivity in admissions, and social elitism”.  It also says the eight schools have a “canonical definition” and a distinct “educational philosophy”.  In plain English, these schools share a history which will directly impact your experience as an undergraduate.  Vanderbilt does not share a similar history.

Vanderbilt University has its own history shaping the student experience.  Whereas the Colonial Colleges (seven of the nine are now Ivy League institutions) spurted with religious expression and sectarian identification, Vanderbilt came to fruition as America grappled with federalism.  The histories of Ivy League colleges reflect institutional responses to religious freedom and the need for cleric preparation.  Vanderbilt’s birth in the South during Reconstruction lends to an institutional history worlds apart from our educational brethren in the North.

Originally named Central University, Vanderbilt was the brainchild of the Methodist Episcopal Church South.  So certain of their righteousness, the MECS rejected reconciliation with Methodist members in the North for 70 years after the Civil War.  Yet, Vanderbilt prospered in the South because of a $1 million endowment from Cornelius Vanderbilt (a Northern businessman).  Just this tidbit from Vanderbilt’s beginning illustrates a university blessed with good fortune and unique position.  Not all of our history is pretty or convenient (trust me the Ivy League has its own ugly chapters), but it is distinctive and unique.

While many of our Southern peers struggled throughout Reconstruction, Vanderbilt grew.   Ahead of its time, Vanderbilt awarded its first degree to a woman in 1879 and by the 1890s did so with regularity.  The university won its court battle with the Methodist Church in 1914 to become independent.  Football existed at Vanderbilt almost since its inception and the university is still the only private university in the SEC.  Classes continued throughout the Nashville sit-ins of 1960.  Martin Luther King, Jr., Stokely Carmichael, William Buckley, and Robert Kennedy all spoke on campus during the turbulent 1960s.  In 1963, in the midst of social strife, Vanderbilt entered national rankings as a top-twenty collegiate institution (it remains at the top of national rankings).  Peabody and Vanderbilt joined in 1979, merging divergent educational philosophies.  The extraordinary talent of the Blair School of Music also joined Vanderbilt in 1981.

In Fall 2010, Vanderbilt welcomed the most talented and diverse incoming class in school history.  The university hosts students from all 50 states and 101 countries.  Over 86 percent of our students are from outside the state of Tennessee and over 60 percent originate from beyond the Southeast.  Individuals literally travel the globe to be part of the Commodore family and to build the Vanderbilt of the future.  So, forgive my irritation over “Ivy of the South” comments.

We are not an Ivy League institution.  We are Vanderbilt. 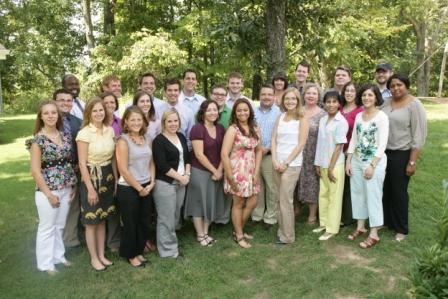