Can I tell you how much I love UCat? I could try, but I don’t think it’s a thing that words can really describe. I’ve tried, though, and if you want to check that out, click here! There’s also an AMAZING post called “More about University Catholic,” written by Faith Noah, which is amazing. While most of the Christian ministries are nondenominational, University Catholic can’t say the same. But that doesn’t make it intimidating, just different. Regardless of where you are in your faith journey and what denomination or not that you identify with, I definitely encourage you to come to any UCat event to meet the beautiful people that are the people of University Catholic. Whether that’s swing dancing, random dancing at our Easter Party, a discussion about CS Lewis on Thursday nights at 7 pm, or any other of our events, it’s definitely a community that’s worthwhile to meet. If you’re an incoming freshman, check out the Facebook group and Facebook page!

What does UCat have? So many things.
– Bible Studies multiple times a week for every year, divided by girls/guys
– Events called Roman Rush in the first few weeks of school, including soccer with the nuns on Wyatt Lawn and smores on Highland Quad!
– Events twice a month just for freshmen called Ascend! Y’ALL I AM SO EXCITED FOR THIS.
– A way to connect with upperclassmen about your major, art interests, fears about engineering, hobbies etc through Ascend’s engagement chairs, Fletcher and I! (Text me 469-394-0417 if you’re interested!)
– An Intramural Sports team that’s a really chill way to play sand volleyball and meet new people
– Intellectual discussions every Thursday at 7 pm focused on Catholic and Christian writers, and led by the amazing Peter Kim
– An incredibly diverse community. UCat is just a microcosm of the Catholic Church — we have international students, people of all races and backgrounds, all united by one faith and friendship

“When I was a freshman, I had a desire to follow Christ and be a Christian, but I didn’t have the courage to pursue it. When I first arrived at college, I worked up the nerve to go to mass on campus, but I was really scared because I had so much sin in my life and had never really had a group of Christian friends. It was such a relief when I arrived at mass and was greeted by so many people who immediately welcomed me. They met me where I was at in life and really taught me what it meant to be a Christian and experience the Christian joy. After three years, the people in UCat have become some of my best friends and continually push me to be a better person.
Because of this great experience, I’m assisting in this coming year with Ascend, a program to welcome freshmen. I know that UCat is a very welcoming place, and I really want there to be no doubt that everyone is welcome not only to our social events like Alley Party and our intramural team, but also to attend Mass and Adoration as well. Jesus is calling us to be saints after all!”
–Fletcher Prouty, Mechanical Engineering, Class of 2018

When I first got to Vanderbilt’s campus as a cradle Catholic, I was positive that I would not be involved. Late-night Sunday Masses for college kids were timed as such so that you were forced to go, right? So that excuses about weekend plans or homework wouldn’t have a leg to stand on? But having a wildly different schedule every day of the week, new people in every club and class, and new faces every time I walked down the hallway made the bustling Vandy campus feel incredibly isolating. And then the University Catholic Community made it nearly impossible not to join in.

One of the most beautiful things to me is the universality of the Catholic church (it’s in the name, after all!), and how that provides an incredible foundation for friendships to begin. That baseline of sacraments- from organizing reconciliation trips, to the lightness yet fullness that fills every walk back from Mass over Peabody bridge, to the consistency of events and Sunday Suppers, to sharing the deepest parts of your faith struggle with girls you met three months ago in Bible Study. Future Freshmen: allow yourself to be a part of the UCat community. It is one of the most beautiful, rich, expansive communities on campus, and not just because it stretches all the way up to the heavens.

The summer before I came to Vanderbilt University, I saw an advertisement for Roman Rush. Curiosity took hold and I looked into the event with its multiple activities lined up for that first hectic week of college. Little did I realize, this small investigation would lead to my involvement with one of the greatest groups on campus. Being Catholic all my life, I knew I wanted to find a group who shared my experience, but as the day of college neared, I started to question whether or not I was joining out of habit, or if I really wanted to grow in my faith. Plunging into that first week, I realized what amazing people were involved with this organization. Their welcoming faces and kindness drew me to the group right away. As I started to love the people, I started to regrow in my faith. The members of UCAT pushed me to go above and beyond with my prayer life. I was asked to join a bible study, something I had never done before. The girls I met and the love of Jesus we found in those quiet Wednesday afternoons will be an experience I will never forget. My best friend at Vanderbilt was also a member of UCAT, she was preparing to be initiated into the Catholic Church. Accompanying her to her faith classes helped me to become a better Catholic myself. For the first time in many years I was continuously going to mass every Sunday. However, I was not forced to do any of this. The love I had for the members, and the growing love for Our Lord pushed me to dive into this ministry. The hard work of the members of UCAT shine through in everything they do. They make all of the experiences enjoyable, and faith-filled. I look forward to doing more with this ministry and attending the famed Awakening retreat in the fall. To all incoming and present students at Vanderbilt, I implore you to take time and discover what an amazing opportunity lies before you. You will not regret it.

As an 18-year-old Catholic going almost 1000 miles away from her hometown to college, I was worried about my future faith life. Would there be a nearby church? Would it be filled with old people? How would I get there on Sundays? Are there other young Catholics at Vanderbilt? But all these worries left when I saw the Roman Rush schedule on my Facebook feed from University Catholic. I was so excited- there was an actual Catholic organization on campus! And they had fun things like s’mores, soccer with nuns, and even a retreat planned for the first week.

Looking back from that first week to now, I can say that University Catholic (“UCat”) was probably the best thing that happened to me. What a blessing it has been to have fellow Catholics praying for you, learning more about the Church doctrines on Thursday evenings, sitting down for lunch with you when you don’t know anyone…

UCat has brought me closer to God. And I’m so thankful for it!

So, incoming freshmen (from any faith background)… go to Roman Rush! And be open to meeting University Catholic people- they are genuinely the kindest people on campus.
–Arianna Nimocks, Class of 2020 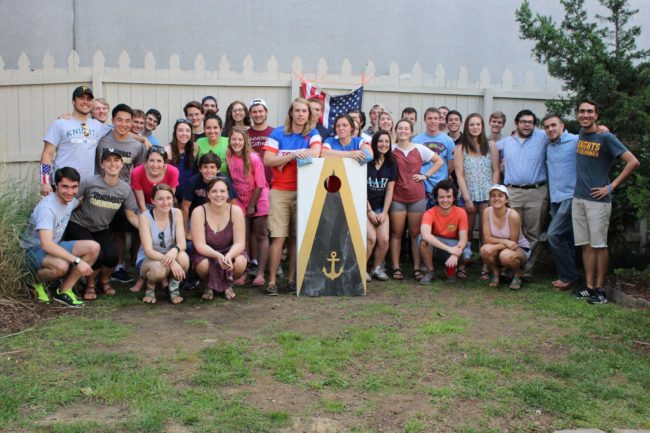