On a Quest for Live Music

As someone who has lived in “Music City” for three years, I’m embarrassed to say I’ve been to less than ten or so concerts in Nashville. This shameful confession isn’t because I don’t love live music–I do. It’s also not because it’s too expensive to find live performances (sure, concert tickets can really rack up) because there is an abundance of free live music from burgeoning new artists in Nashville. Amidst balancing campus involvement, social life, school work, and the occasional couple hours of sleep, it’s easy to feel completely consumed at Vanderbilt.

This year, my friends and I made a pact to change that. We started off our live music endeavour with a bang: The Lumineers’ 2017 North American tour at Ascend Amphitheater. 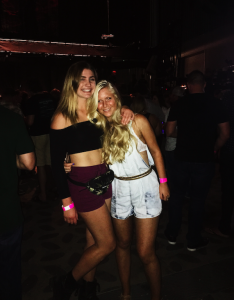 We showed up a little late and missed the opening act, BØRNS. **Running late has unfortunately turned into our “thing”** The first thing we noted was just how breath-taking the view from the venue was. Having never been to Ascend Amphitheater, the lit-up John Seigenthaler Pedestrian Bridge and perfect seventy-degree weather made for the ultimate setting.

Knowing little of where our seats were, we headed inside only to find out we were in the mosh pit. While some might see the mosh pit as overwhelming, we saw such an open space as an opportunity for easy access to the front row. Of course, that takes some aggression and boldness. Thanks to the Nashvillians’ politeness and our stealthy maneuvering (only light elbowing), we found ourselves front and center. 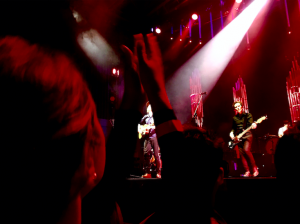 From the cellist’s bow to the lead singer’s beard, seeing the details made us feel like we could reach out and touch the band. It was an experience I’ll never forget. Singing along and jumping around (seriously, I’m sorry to the innocent people behind us), made for one of my favorite nights in Nashville.

After embarking on our night of pleasant surprises, we decided we should keep the random, upbeat energy flowing. Why not keep riding the high? Because another concert at Bridgestone let out at the same time, cabs were scarce on Broadway. As we walked by the pedicabs, my friend and I looked at each other and before we knew it, we were high-tailing it down Broadway. Sure, it was $10 per block (SOS), but we rationalized that it was OBVIOUSLY worth it for the experience. 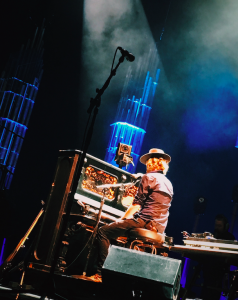 While it wasn’t the wisest way to spend my money and not every night turns out as fantastic as this one did, it encouraged me to explore more and get out in Nashville. Even if the artists aren’t a big name like “The Lumineers”, performances and events around the city can be the perfect way to let your hair down and have a night to remember. These unforeseen adventures are looming right outside of your dorm. Who knows? You might just find yourself riding a pedicab through the city.