“Check” this: My first NHL game!

Every month, Vanderbilt offers Commodore Cruises, free trips around the Nashville area that involve fabulous meals and unforgettable experiences. Just this year they’ve gone to a Janet Jackson concert, an Aretha Franklin concert, went on a special MLK history tour, and more! I was one of the 25 or so lucky winners for the month of February, and took my friend Elizabeth (another Inside’ Dores blogger!) with me to see a Predators vs. Bruins hockey game!! 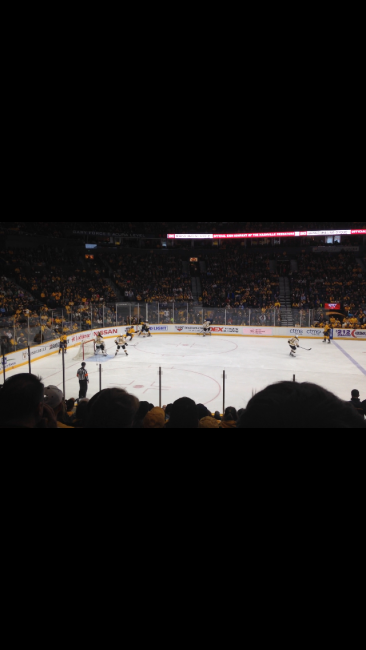 I had never been to a hockey game before, so I wasn’t really sure what to expect. Thankfully Elizabeth, a die-hard hockey fan, was kind enough to put up with all my questions during the game, and let me squeeze her hand when things got scary. It was super intense and surprisingly captivating; those 2 and a half hours just flew by! Although we were playing a team that was ranked above us in the (division? league?) we had a shutout, winning 2-0!

We were definitely spoiled with the food and special treatment we got, the whole time Elizabeth and I were just freaking out and saying “is this even real” to ourselves.

Overall, it was a fun, unforgettable experience! The only thing I disliked about hockey is all the booing and and other negative traditions involved, but Elizabeth says it’s all just part of the territory.

It’s so great that Vanderbilt offers students a chance to get out of the “Vanderbubble” and explore all that Nashville has to offer – if I hadn’t gotten free tickets, I don’t know if I would ever have made the trek down to a Predators game on my own, so Vanderbilt also achieved it’s perrenial goal of pushing students outside their comfort zones a little to try new things!

Hopefully this won’t be my last Commodore Cruise; Rest be assured I’ll post on here if I ever win another one!