Posted by Aditi Thakur on Monday, November 2, 2015 in Academics, Blog, College of Arts and Science.

I know I’ve blogged about my classes before, but I’ve been a bit general about them. So I thought it would be much more fruitful if I just focussed on one class in my new post. I’m taking five classes this semester, but the most ‘blog- worthy’ would definitely have to be my honors seminar called Science Fiction, taught by Professors Jay Clayton and Robert Scherrer.

I’ve talked a bit about my previous honors seminar on crime in Victorian England. This one however is completely different in its content and structure. That’s what I love about Vandy; no two classes are similar, and you have a whole range of interesting topics to explore, from Jack the Ripper to generation starships.

I was initially hesitant about taking this class because my knowledge of science fiction was limited to movies, and I hadn’t read many classic science fiction works before. On top of that, I’m an economics (and maybe math) major, so my knowledge of quantum mechanics, wormholes and relativity (often the building blocks of sci-fi stories) was lacking. What if I didn’t get the scientific concepts? The imposter syndrome had never felt more real. Thankfully, Professor Clayton assured me that no previous scientific knowledge was required, and I decided to enroll in the class. And boy, did I make the right choice

A class on science fiction for which I get to watch Interstellar and Gravity as homework? ‘Nuff said. Apart from the content of the class, what’s even cooler is that I have not one but two fabulous professors: Professor Clayton who’s the former chair of the English Department and the director of the Curb Center, and Professor Scherrer who’s the chair of the Physics Department. Imagine this. One day, an English professor and a Physics professor walk into a room…..that sounds like a beginning of a joke, but it’s not! At Vandy, we get to do awesome things such as take classes that are taught jointly by professors of seemingly disparate academic circles. Physics and English, though they may seem to be incongruous subjects, blend seamlessly through the genre of science fiction, and our class. While we read novels or short stories most of the time (the realm of English), those works belong to the science fiction genre, in which many concepts of Physics are creatively extrapolated (the realm of Physics).

Both my professors exude so much passion during class discussion, much like giddy 14 year old boys talking about their favorite science fiction books (kind of like Sheldon at the comic book store!). In fact, Professors Clayton and Scherrer often reminisce about how they developed their interest in science fiction, when they didn’t have slick Christopher Nolan movies that generate so much publicity for the genre. In those days (and even now) Isaac Asimov, Robert Heinlein, and Arthur C Clarke, often called the holy trinity of the science fiction genre, were more than enough to cultivate a life-long passion for the often marginalized genre. Did you know that science fiction was/is looked down upon by condescending literature purists? Maybe it was too groundbreaking for them. Putting this in the context of contemporary times, even now we don’t find adequate representation of sci-fi movies at the Oscars.

I’m digressing from the purpose of this blog post now. Back to the class! This class has helped me explore the worlds of Clarke, Heinlein, Bradbury, and Asimov. We deal primarily with hard science fiction, in which the focus is mainly on science and less on characters, but we have also read novels like Timescape by Gregory Benford, in which some level of character development does take place. In fact, our professors even invited Gregory Benford to our class! It’s so cool to directly ask the author questions about the book, and learn about his perspectives. 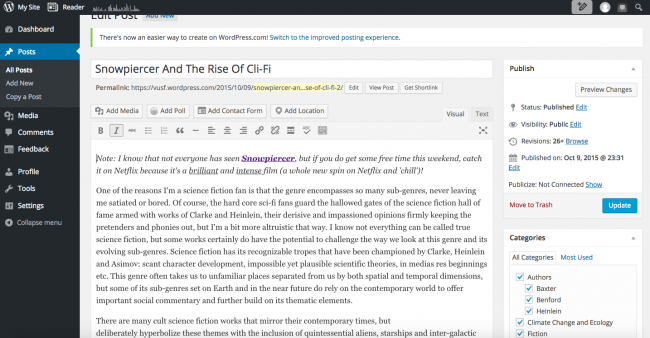 We also have a class blog in which we post regular blogposts about anything related to sci-fi. We don’t get topics assigned, and we don’t have to stick to readings. I wasn’t expecting such freedom in writing, but I’m happy that our professors let our creativity run wild. I blog as dreamer2205 if you want to read my blogposts! This class is the first one that requires any blogging from me, but being an Inside ‘Dores blogger, I absolutely love this aspect of the class. It’s been a great way for me to further developing my blogging skills. WordPress is now my middle name.

Our professors also go above and beyond to give us the ultimate sci-fi experience. We were treated to a screening of The Martian before fall break. In fact, after taking this class, I’ve developed a much more analytical view of sci-fi movies, as I mention in this post. Professor Clayton also took me and a few of my classmates to an avant-garde horror video-art show during Halloween! It’s rewarding to interact with professors outside of class because it helps me learn more about their unique personalities. Of course, the Tesla ride was an added bonus!