Congratulations! You have been admitted to the College of Arts and Science at Vanderbilt University for fall 2015. Although we will mail your official admission packet by April 1, we are notifying you now because you have been selected as a Cornelius Vanderbilt Scholarship recipient…”

The day was March 6th and the time about 4:00 PM. Standing in my kitchen, I stared at the email.  Later, I would learn that many of the other CV Scholars had the same experience; was it even real? After applications to eleven schools and an uncountable number of scholarship essays, I couldn’t believe that Vanderbilt actually wanted me. Me! The incredibly unathletic girl who wore the scar from running into a wall her sophomore year of high school during a particularly intense game of Keep Away. The valedictorian who was always late to class. The girl who wanted more than anything to attend a university with red brick buildings, lots of trees, an intellectually vital student body, and an amazing Catholic group just a block off campus. The girl who never knew it until The Email, but who was a true Vanderbilt student. I couldn’t believe it, but Vanderbilt wanted me. 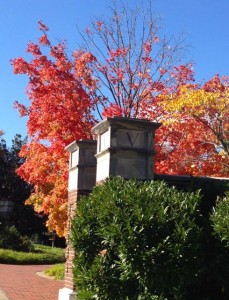 A month later, I still can’t believe I’m walking around on Vanderbilt’s campus. I’m walking on the same paths I toured as a potential student, only this time, I’m carrying my math and chemistry textbooks, heading to office hours. This time, I’m carrying my Commodore card (which has a picture that took me hours to take) and my dorm room key, safely tied around my wrist. This time, I’m a real Vanderbilt student. And I still can’t believe it’s me.

In the past few weeks, I’ve explored the coolest of the red brick buildings. I’ve swing danced in the rotunda of the Wyatt center (gorgeous!), reviewed math proofs in Cohen, and spent many, many hours in office hours in the Stevenson Math Center (which is the coolest building on campus, obviously).

I’ve also spent so many afternoons under the trees on main campus. Last Thursday, after a particularly tiring day, I carried a chocolate milk and Caesar salad from Rand, one of the main campus dining halls, and took it to the courtyard near Stevenson 6. I sat on the wall by myself, taking in all the trees and sunlight, feeling as if I were a tree nymph just watching all the well-dressed, incredibly good-looking people walk by (dressing up at Vanderbilt is totally a thing).

When I applied to Vanderbilt, I was thinking a lot about the Stanford essay prompt, about “intellectual vitality,” which I had seen on the College Apps. I thought that I would never find the intellectual vitality of Stanford at Vanderbilt, but I was so wrong. Through my math class (Math 2500!), I’ve discovered people so excited about light equations that sometimes, it is necessary to stop the conversation to write down an equation and admire it. I’ve discovered people so fascinated with proofs that they research new ones for fun, and one classmate is even auditing a graduate-level class–as a freshman!

I’ve talked about the connection between neuroscience and music till the late hours of the night at University Catholic’s Awakening retreat. I’ve walked out of the Honors biology seminar “Why is Biology Complex?” with my head spinning from the amazing nature of Godel’s Incompleteness Theorem. I’ve sat in the Stambaugh lobby zooming in and out on a prezi of the size of the universe from quark on up with a fellow CV Scholar, both of us enthralled with the sizes of the various elements of our existence. Don’t be afraid to embrace Vanderbilt; the intellectual vitality is here.

As for University Catholic, one of my last reasons for coming to Vanderbilt, I could write pages and pages and pages about how wonderful they are, and you will hear SO much more about them and all my classes, as well as the rest of my extracurriculars! I wish you the best of luck with your endeavors, and if you have any questions about Vanderbilt, contact me at sophia.druffner@vanderbilt.edu! I’d love to talk to you!