Vanderbilt gives its students so many opportunities to grow both personally and professionally. While the most obvious ones are academics and extra-curricular activities, Vandy also offers you the chance to develop deep and meaningful relationships with your professors. VUcept, which pairs first-years with a faculty VUceptor, is another great away of getting to know your professors beyond the usual lectures and office hours.

Before my very first Visions meeting, I was a bit nervous about interacting with my VUceptor, Dean Frank Wcislo, because he was the dean of the Commons and as a first-year, I hadn’t come across many senior (and famous) faculty members in a such a close environment. What if I said something naive? What if I wasn’t able to communicate with him? What if we had nothing in common? 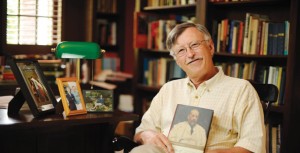 Thankfully, my fears did not come true because Dean Wcislo is not a typical dean. Although we were all strangers in our first Visions meeting, he welcomed us into his home, initiated the conversation and engaged with us as a friend rather than a professor. His enthusiasm and warmth made me feel as if I had known him for a few years, not a few hours. Over the course of Visions and even beyond it, Dean Wcislo helped me and my Visions group explore the different aspects and resources at Vandy. Thanks to Dean Wcislo and Rebecca, my student VUceptor, our Visions group bonded and connected more easily. The first semester is said to be the hardest, but with the help of invaluable mentors such as Dean Wcislo, it has been one of the most cherished experiences of my life.

During our last Visions meeting in December, as I was saying goodbye to Dean Wcislo, he told me not to hesitate in asking him for a recommendation for VUcept applications. I was surprised because I even though I had vaguely expressed a desire to apply for VUcept many weeks ago, I did not think that Dean Wcislo would remember it.

This is what makes him unique. Dean Wcislo goes out of his way to make you feel valued and loved. Although I do sometimes run into him on my way to class (I said hi to him in Wilson while writing this blog!), I miss going to his home for Visions every week. I am going to miss him so much more now that he is stepping down as Dean of Commons.

While I am excited to meet the new dean, Vanessa Beasley, Commons won’t be the same without Dean Wcislo, who has led this unique community since its inception. I feel fortunate that I had the opportunity to connect with him on such a personal level, especially during Visions.

Thank you Dean Wcislo for being such an amazing VUceptor, mentor and friend. I’m going to miss you so much!