An End to 4 Years of Football

With Vanderbilt’s last game of the season against Tennessee, it capped the last football game of my undergraduate career.

Sure, by the end of the Tennessee game, I was bitter that we had not finished the season with a win, losing by a narrow margin of 7 points. But, it was time for the season to be over. It goes without saying that this first season under Derek Mason was not the season we were hoping for. But with the number of seniors we lost due to graduation, the writing was on the wall that it wasn’t going to be a pretty season. We just weren’t prepared for how ugly of a season it was going to be.

Many are calling for Derek Mason’s head. I think that’s foolish. This season was a transition year where we tried to make drastic changes on both sides of the ball. Our attempted transition into a west coast offense and a 3-4 defense were difficult changes that the team struggled with early on in the season. However, signs of improvement showed especially in the defense that was dominated by many young players.

But, the season is over now. It’s time to rebuild and build upon the positives of the season. Many young players, such as Ralph Webb or Darrius Simms, stepped up and showed they have the talent to lead he team to greener pastures and to bring us back into bowl game season. I continue to stand beside Derek Mason and support him as I believe it the correct decision regarding the current situation of our football team.

These past 4 years watching Vanderbilt Football has been an incredible experience and I will miss going to every home game and watching the team from the student section. I can confidently say that, for me, football season was one of the greatest moments I will remember during my time as an undergrad at Vanderbilt. 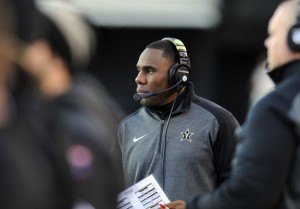