This week is the Vanderbilt Office of LGBTQI Life’s Ally Days, and today I attended a Safe Zone training workshop to learn about personal and cultural identities, privilege, and what it means to be an Ally. It also serves as professional development for leaders and future employers.

My favorite part of the session was a part called “Intersections of Identity.” Everyone has various components of their identity, whether sexual/gender or national, cultural, racial, ethnic, political, religious, and these parts overlap and intersect. Their importance and centrality at any given moment varies from situation to situation.

Personally, I have many aspects of my identity, and while I detest labeling myself, I think of myself as cross-culturally fluid and fluent; a survivor of anxiety and disordered eating; an independent person who can make decisions for herself; a writer and communicator; an environmentalist and vegetarian; a daughter and a sister; a Vanderbilt student; and as a friend and now, an Ally. I have these various aspects of my persona, and while I don’t expect other people to believe what I believe and live as I live, I am firmly planted in this collective identity. There are some aspects of my identity of which I am proud, and others which are hard to bear. Some are not as important as others. But all of them make up who I am. 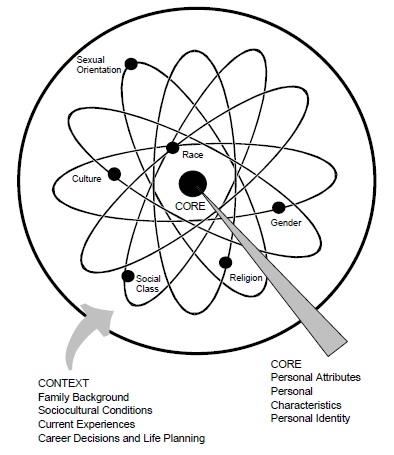 This model conceptualizes the different dimensions of identity, contextual influences on our perceptions of ourselves, and a “meaning-making filter” that gives us control over how we react to contexts and situations. Characteristics of identity move further and closer from our central self, and they continually interact and overlap. It kind of blew my mind to realize how fitting of a model it is.

There was so much more to the workshop, but it suffices to say that the goal of my individual Safe Zone training is to be able to do the following:

I hope that I can meet this challenge and commitment to the LGBTQI community as an ally.

For current members of the Vanderbilt community, you have two more opportunities to attend Safe Zone training days this spring: Thursday afternoon, March 13, and Tuesday morning, April 8, 2014. Register here. If you have any questions or would like more information about the Safe Zone Program, please contact Petey Peterson at petey.peterson@vanderbilt.edu.

Other campus resources for LGBTQI support include the K.C. Potter Center, which is “a place of affirmation for individuals of all identities, and a resource for information and support about gender and sexuality”; and the Vanderbilt Lambda Association, which hosts events and lectures as well as games and parties in the name of diversity, equality, and freedom.