I’ll be real with you–finals week is grueling. After five hours spent in the library working on a research paper that is due tomorrow, I emerged into the night with my spirits low and in desperate need of caffeine to get me through the next ten pages (I maybe procrastinated a little, okay?). I was met by a beautiful sight: snow. And lots of it!

Being from Southern California, people always as assume that I never saw snow before coming to Nashville my first year (when it snowed an abnormal amount and I froze for three months), but at home, I live a mere 30 minutes away from lovely snow-covered mountains (in the winter, that is).  But that’s not the same thing as living somewhere where it snows, and I will forever be astounded by the beauty that is snowfall in what is essentially my front yard.

As I left the library, I received a text from Victoria: she and Ashlin were getting dressed to go frolic in the snow, and would I like to meet them?  My response: OF COURSE.

We met up midway between our dorm and where I was headed to continue writing my paper, and for the next thirty minutes, proceeded to run around in the snow like small children run around in a candy store.  Victoria made a snow angel, I threw a snowball at Ashlin, and of course we took a few family photos: 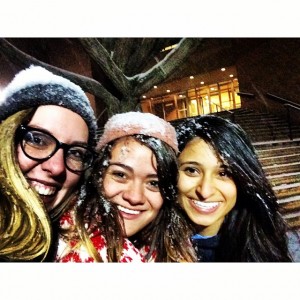 By the end of it, my fingers were frozen, my hair was damp, and my face was raw from the wind and cold, but oh man, was it worth it.  My mood was infinitely better, and I felt ready and rejuvenated–that looming paper doesn’t seem so bad anymore!