When I think back on my time at Vanderbilt, one of first things that comes to mind is the often amazing and extraordinary opportunities that I have been provided. Whether it the amazing musicians who perform at Quake and Rites, getting to go to every football game for free, or of course the saturation of fun exciting events (all with free food of course) happening on campus. Today was no exception, as I got to see Laverne Cox speak at the SLC tonight.

Laverne Cox is a Trans* activist. She also just so happens to play Sophia Burset in the amazing new show Orange is the New Black. Tonight, Laverne spoke to a standing room only audience to share her Journey into Womanhood. Laverne discussed her childhood and the adversity she continually faced as a gender non-conformist growing up in the South. She later discussed attending college in New York City, and how it allowed her to fully and comfortably express herself. Finally, she discussed life after her sex operation. The part I enjoyed most was when Laverne discussed how identification after realignment surgery. Regardless of sex, some choose to identify as Trans* while others choose to identify as strictly male/female. Laverne discussed her own identification of Trans* as opposed to identifying herself as a woman, because she expresses herself as somewhere between two constructed genders.

Laverne’s ‘Journey into Womanhood’ was apart of a larger series of events sponsored by the Vanderbilt Office of Lesbian, Gay, Bisexual, Transgender, Queer, and Intersex Life for National Coming out Week. The Office of LGBTQI Life alongside the K.C. Potter Center, does incredibly influential and important awareness, advocacy, and education both at Vanderbilt and in the greater Nashville Community.  They also throw many events, educational seminars and discussions, safe-zone and other training events, and of course host speakers like Laverne. The Office of LGBTQI Life often coordinates with the Margaret Cuninggim Women’s Center, whose goal is to lead co-curricular campus initiatives related to women’s and gender issues, creating innovative opportunities to make the Vanderbilt community safer, more inclusive and equitable. These two organizations have accomplished amazing things, helping to make Vanderbilt the wonderful community it is today.

On a related note, if you have a further interest in this subject, I encourage you to check out the department of Women and Gender Studies here at Vanderbilt. Vanderbilt is one of the few schools that offers both a major and minor in Women and Gender Studies. What I think is awesome about our Women and Genders Studies Department is that it takes an interdisciplinary approach to the study. Besides the departments own course offerings, the major and minor requires courses from various departments like Communications Studies, Philosophy, History, Religious Studies, German, French, Political Science and English, to name a few. 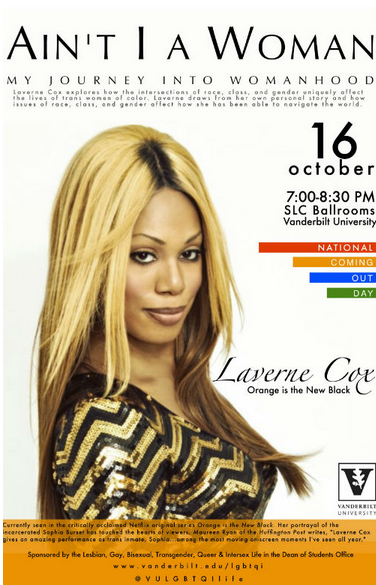 Cheers to the Weekend,