Well, originally, I planned on talking about some pre-med related stuff and how yesterday I signed up to shadow a physician over at the Medical Center for this semester. But, I’ll hold that story for another time.

Because… something wonderful has happened. Something… magical.

So it begins on this cloudy Thursday afternoon. There I was sitting in Physics class with Dr. Momchil Velkovsky, a very passionate and funny professor, dreading the upcoming physics exam on Wednesday night. We were learning about forces, hardly an invigorating topic.

But then, something happened.

The heavens opened up and a beam of light shone out of… my iPhone.

What had I won? A free car? 1 million dollars? No. It was even better. Infinitely better.

I had won two tickets to the Taylor Swift concert. THE TAYLOR SWIFT CONCERT.
I was ecstatic; on cloud nine. I don’t really know what happened for the rest of that physics lecture so I hope it doesn’t show up on the exam.

Just minutes before that email, I had checked StubHub to see how much the tickets were and was disheartened to see that nose-bleed tickets were still going at around $55. But then, I was given a gift from the gods.

Now, back to the logistics of this. How had I won this prize? Well, ResEd hosts something called a “Commodore Cruise” once a month where they take 10-20 students on some kind of field trip/event for free. All Vanderbilt students receive an email where they can sign up to join the lottery and a handful of them get chosen. The event for this month was the Taylor Swift concert. I’m sure a lot of people signed up for the lottery, I just got really lucky.

Or was it luck? As I recall, back during Freshmen year, there was another Commodore Cruise event. This one was to the CMA awards where Taylor performed at the Bridgestone Arena. And of course, I won tickets to those too. This time, when Taylor performs again, I win these tickets also. Coincidence? I think not. It must be fate.

It is obvious that Taylor and I were meant to be. It began many many years ago when I heard Teardrops for the first time. Then came songs like Our Song and Love Story: the old Taylor. Then came this new country-pop Taylor which I accepted into my heart. Last year, I took History of Country Music which was a big test towards my dedication towards Taylor. I passed the test by writing a 5 page paper on Taylor Swift that received an A: The greatest achievement of my Vanderbilt career. If you want to read a scholarly text, read my essay.

And now, I am once again reunited with the one and only Taylor Swift.

I will indeed be taking applications on who gets to come with me. 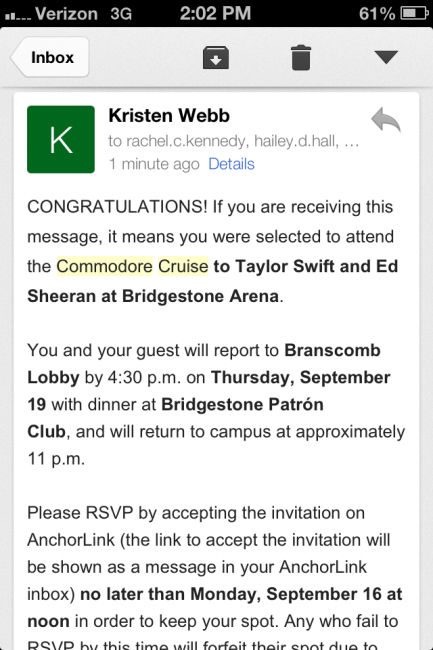