Remember back when your older siblings took the old SATs and they had that section on analogies?  Well, I learned some from them, and here it is: Nashville is quite similar to Brevard.  To be even more specific, Hillsboro Village : Downtown Brevard. 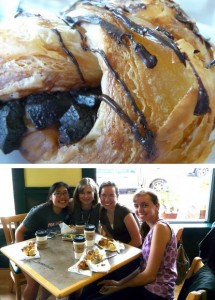 My friends M. and S. came all the way from Nashville to visit K. and me, students of the Brevard Music Center (BMC).  Okay, I’ll admit, they were more visiting their family who lives in a neighboring city, but they did drive an hour to come spent an afternoon with us!

Leaving the BMC campus, we first stopped by the Bakery, which is so much like Hillsboro’s Provence.  Stepping into that pastry shop filled my nose with all aromas wonderful.  Each of us chose a different treat, and we made our way to a local cafe called Quotations where we sipped on some coffee and chai tea.  Quotations is practically the same hangout as Fido in Nashville, where people chat, use the Wi-Fi, and act hipster.

After catching up on and laughing over weddings and random exploits, we decided to wander around.  We visited the Farmer’s Market which was across the street, and this reminded me of Victoria’s recent post about visiting the synonymous place in Nashville.  Meandering around Main Street, we looked at all the quaint little shops and hubs.  There was a Kiwi Gelato shop which made me crave Sweet Cece’s frozen yogurt.  I’m still loving the fact that Sweet Cece’s is on the Card.  Double Points Tuesdays everyone!

We went to all these local shops along Main Street and it was spectacular.  It was oddly reminiscent of Hillsboro’s shops like A Thousand Faces and Pangaea.  We donned many a hat and apron, admired adorable trinkets that we wished we could afford, and enjoyed each other’s company for the afternoon.  My Nashvillian friends had to depart too soon, but we were comforted by the fact that we would once again be reunited in a mere month… at the start of school!  Boy, am I excited to go back to Vanderbilt!