At least once a month, Dean Wisclo, the Dean of the Commons who literally lives on the Commons, hosts “Dinner at the Dean’s Residence.”  My friend Matt Lammers, a violinist, thought, why not bring Blair to the Commons?  Here’s his take on founding an initiative called the “Blair Salon Series”:

Simply put, the Blair Salon Series is a collection of monthly recitals featuring students of the Blair School of Music, but it’s much more interesting than that. The idea was conceived over dinner after a concert by the Blair String Quartet at the Dean of Commons’ Residence. All, including Dean Wcislo, raved over how enjoyable it was to experience chamber music, something that has migrated in relatively recent years to the concert stage with black ties and tailcoats.
Chamber music, however, originated with a small, intimate audience, a cozy venue with no more than two feet between audience and performers, a delicious meal over which the evening’s performances were discussed informally amongst audience and performers alike, and the freedom to wear your comfiest pair of jeans, flip-flops, t-shirt, and sweatshirt. Our conversation carried on; “it seems a shame not to take advantage of this space more often.” “Of course, wouldn’t it be excellent to get students in here?”
Yes, yes it would. So why not?
One thing led to another, emails were exchanged, meetings were had, calls were made, dates were penciled into calendars, and brains were stormed. Dean Wcislo would supply the food, the venue, and the advertising, and Blair would supply the music and manpower to make it fall together. Here are the fruits of that fateful conversation, by the numbers:
These all added up to a successful project, extraordinary turnouts, a commitment to reestablish and continue the Series through the coming years, and a promising Vanderbilt tradition.
Emails will be sent out to the Blair student body late this summer or early fall to establish a new repertoire and body of performers around which programs can be constructed. We can be found on Facebook, where we’ll post updates once these programs take shape. Until then, however, have a taste of what the programs of ’12-’13 looked like.
American Music — The Series pilot was fairly conservative as a concept, but a variety of genres were featured. We heard everything from jazz guitar and vocals, to American avant-garde performance art, to contemporary American classical literature. 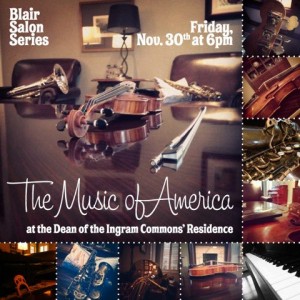 Impressionism — Dr. Michael Slayton, Professor of Music Theory and Composition, joined us in the house to preface the evening’s program of Debussy (yes, we know Debussy is by no means the only Impressionist; that’s just how the program worked out) and lead a post-concert discussion. Debussy’s The Girl with Flaxen Hair, Premiere Rhapsodie, and Violin Sonata were on the program. 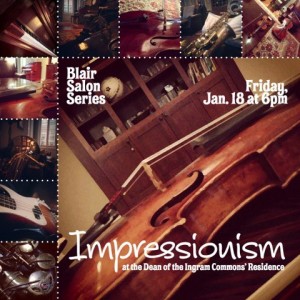 Students Playing Student Compositions — Three of our phenomenal student composers were in the house to talk about and perform a number of their own compositions. The performances led to a great post-concert discussion and interesting dinner conversation. 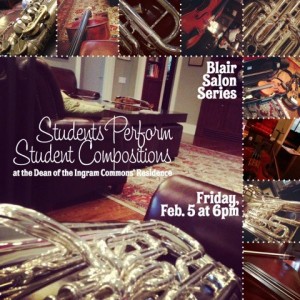 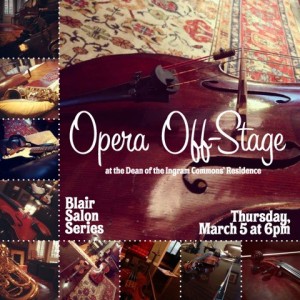 Faculty-Student Chamber Music — Music students, begin salivating. The moment you’ve been waiting for is coming (we’ll be doing this again at least once in the ’13-’14 Series). Students and their professors rehearsed over the course of three months and performed some of our most revered repertoire in the Dean’s house. Professors Teal, Heard, Huebl (violins), Reinker (viola), Dorfman (piano), Hauser (oboe), and Dikeman (flute) performed movements from the Mendelssohn Octet, B-flat String Sextet, Vivaldi D minor Violin Sonata, Prokofiev Quintet (for violin, viola, oboe, clarinet, and bass), and Ravel’sIntroduction and Allegro (for harp, string quartet, flute, and clarinet) with a selection of string, wind, and harp students. 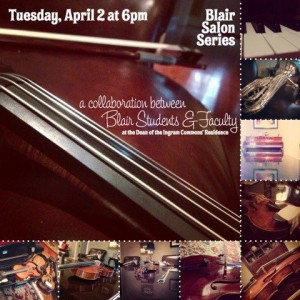