Thursday night, the Commodores kicked off their 2012 football season. Actually, they kicked off the entire SEC season, welcoming the University of South Carolina Gamecocks to the brand new stadium. The experts said it would be a blow-out and although the Commodores came away with a 17-13 loss, we have a lot to look forward to this season.

First and foremost, the new stadium was great. The field has been redone with artificial turf. The end zones are so much cleaner and prettier, and they even have little anchors drawn onto the grass to mark the spot where the ball goes for kickoff. We also have a new high-definition jumbotron- a HUGE improvement over the old screen that was about the same size as my computer screen.

Second, the stadium was packed. This tends to be the case at the beginning of the first game, since the freshman run across the field as part of a first-year tradition. (Click here to watch a video of last year’s run.) But, everybody actually stayed for the entire game. Not only was the student section full, but entire other side behind Vanderbilt’s bench was full too! And if the sheer numbers aren’t enough, everybody was dressed in black and they were on their feet for all 60 minutes.

Now that the Commodores clearly have the fan base, hopefully they can close that tiny gap and end up with some Ws. 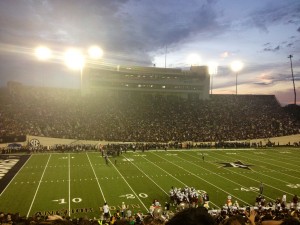