How I Know the Robots Are After Me

Earlier in the semester (MUCH earlier), I talked about my first day of Mechatronics class. I mentioned the kit we’d be working with, complete with Arduino micro-controller, circuit components, and other such tools. Each week in February (the kits came into the bookstore late), we’ve had an assignment involving creating or modifying code for the micro-controller and building/testing a simple circuit to accompany the software. The first two assignments went swimmingly (spent way too much time on the second one), but this week’s seemingly simple simple instructions led to a very frightening discovery:

The robots are after me.

After spending several frustrating hours testing and re-testing and re-re-testing my code and very simple circuit, I was forced to conclude that one of the components from my kit (a potentiometer) was faulty, In essence, the potentiometer should linearly change its resistance as a knob is turned from 0 to 10,000 ohms, being able to take each value in between based on the position of the knob. Mine would only either register as 0 or 10,000 ohms. SUPER! 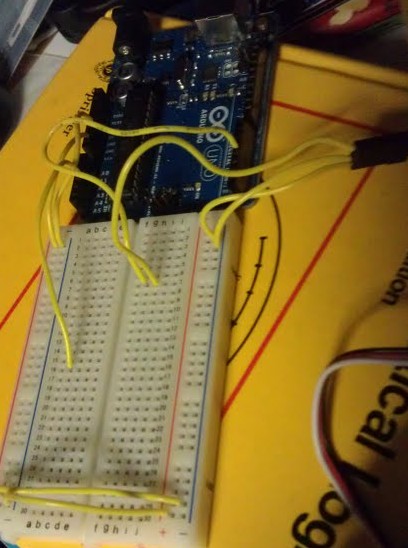 I hunted down a friend on my hall who is also in ME204 and stole his potentiometer to test my circuit – everything worked fine! If the story ended here, I would simply put my malfunctioning component up to bad luck, and life would go on. However, as I tested my final code, my laptop told me it was unable to locate the USB (virtual serial) port where the micro-controller was supposedly attached. Huffing and puffing (“It’s right there, I CAN LOCATE IT, why can’t you?”), I reached to unplug the USB serial cable from the micro-controller, and was instead electrocuted by a nearby component on the board. (But seriously, ow.)

My thumb and my dignity both smarting, my head reeling, everything became suddenly clear – The micro-controller wasn’t satisfied controlling small, simple circuits. It wants to control mankind.