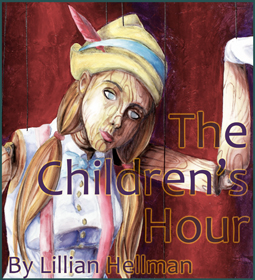 For the next week, Vanderbilt University Theatre is performing The Children’s Hour. It opened on Friday night and I was lucky enough to see the first performance.

As I’ve mentioned before, I’m minoring in Theatre and taking Theatre 204: Development of American Theatre right now. I’m required to see the two shows that VUT is putting on this semester (the other is The Liar in April) because we will have class discussions about them. Also, we were split into two groups and each assigned a play that we have to design a project around, but I have The Liar so you won’t hear about my project for a few months.

I convinced my housemates Victoria and Maggie to venture to Neely Auditorium with me even though they had no idea what the play was about. I don’t want to give too much away but it’s about a lie a (really mean) girl tells and how it affects everyone around her, set in 1934. The play kind of reminded me of Atonement (which is a really great book everyone should read!).

The seating in the auditorium had been arranged in a big square, with the set in the middle of it. Initially I was afraid the actors would have their backs to me a lot and I wouldn’t be able to hear them, but that was rarely a problem and the setup gave me a sense of actually being in the room with the characters. Not to mention that the casting was perfect and the acting was very impressive.

While The Green Bird last semester was a fun, carefree play, The Children’s Hour resonated with me more and had my friends and I talking about it the whole walk home, because one of my friends was still in tears (spoiler alert!).

For anyone reading this on Vandy’s campus, go see The Children’s Hour this weekend!