Acting for an “A”

Posted by Eileen Robinson on Tuesday, December 6, 2011 in Academics, Blair School of Music. 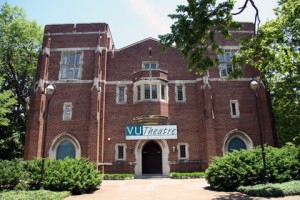 For my Fundamentals of Theatre class, the final project was performing a short scene for the entire class. We were not simply given a script and told what to do by our professor, but rather the performances were entirely student-run. Everyone was broken up into groups and assigned roles: director, actor, designer, dramaturg, or playwright.

A few weeks before the performance dates, we got to rank which roles we’d prefer, and could submit scenes we’d written earlier in the semester to be considered for the playwright. Dr. Essin then assigned everyone a group and we got to work.

I was an actor in my scene, which was fun because the director and playwright were really helpful with their directions and completely understanding about my lack of experience. Not to mention the other two actors in the scene were super talented—one of them appeared in The Green Bird, by VUT, and the other starred in Cosi Fan Tutte, the opera presented by Blair earlier this semester. We performed the scene yesterday and it wasn’t too shabby, if I say so myself.

At a time when most students are feeling overwhelmed by tests/papers in almost every class, it was nice to participate in a legitimately fun project, and then get to watch a few more performances by other groups before rushing off to our next classes.