It’s that time of year again on campus as the football season begins to wind down and basketball begins to gain steam. The nationally ranked Vanderbilt Commodores opened up the 2011-2012 season in Nashville on November 11th with a victory over the Oregon Ducks of the Pacific 12 (Pac-12) conference. Soon after the win over Oregon, the Commodores turned their attention to a talented Cleveland State squad before heading off to the TicketCity Legend’s Classic hosted at the IZOD Center in East Rutherford, New Jersey.

At the Legend’s Classic, Vandy recorded victories over Bucknell University and North Carolina State University en route to the final against Oregon State. The Commodores performed well at the Legend’s Classic winning the tournament. They now will face a couple out of conference teams of note including the Louisville Cardinals and the Xavier Musketeers before starting their conference schedule on January seventh against the Auburn Tigers of the SEC West.

The Commodores have a long road ahead but with the senior-laden team and with young players with tons of experience from last year, it is easy to see why voters have the ‘Dores highly ranked in the early part of the season. The out of conference schedule against some quality opponents will be a great indicator for the rest of the season. Look for the ‘Dores to get a huge boost when senior center Festus Ezeli makes a return to the hardwood later in the season after recovering from injury. 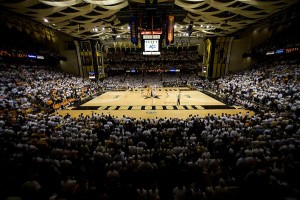