From Nashville to Phoenix to Home!

This past Wednesday, I packed up my bags and left for Thanksgiving Break early, along with the rest of my wonderful women’s club soccer team here at Vandy.  Around two forty-five on Wednesday afternoon, I enlisted the help of my friend (and fellow blogger) Victoria to help my lug my suitcases and other various items across campus from Kissam (where we live) to Branscomb (the dorm right across from Greek Row).  From there, the team piled into cars, and off to the airport we went.  Once on the plane–all checked in, fed, and ready to go–my friend Molly and I had big plans for watching a few episodes of season 2 of Glee on the flight.  Those plans flew out the window when we both fell asleep practically immediately after take-off.  I guess we were more tired than we realized!  When we got to Phoenix, we got our rental cars and headed for the hotel. (My car made a practically mandatory stop at In-n-Out, one of my absolute favorite west-coast places to eat.) As soon as we got to the hotel, it was time for bed. 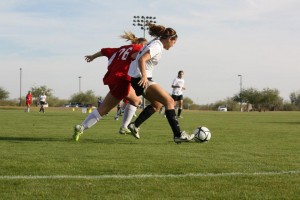 The next day, we woke up well-rested and ready to play.  We had two games on Thursday, one against James Madison University and the other against Oregon.  While we didn’t win either of those games, we fought hard and played well–sometimes it’s just not meant to be.  Thursday night, we went to In-n-Out again (no complaints here!) and then back to the hotel for showers and hanging out.  Friday was our last game against SUNY Cortland and we won! It was the first time the team has ever won a game at Nationals, so while we didn’t advance in the tournament, it was still an amazing way to end it!

That night, we went to California Pizza Kitchen as a team and then went to the movies. (I saw Breaking Dawn: Part One. What can I say, I’m a sucker for a certain werewolf…)  My family drove to Phoenix to cheer us on, so Saturday morning, I packed up and left with my family to go shopping and head home.  Seven hours and a lot of pit stops later, we pulled up to my house and I practically lept out of the car.  I said hello to all of our pets (four dogs and two cats) before collapsing into bed. I am SO excited to be home, but equally ready for some serious relaxation.