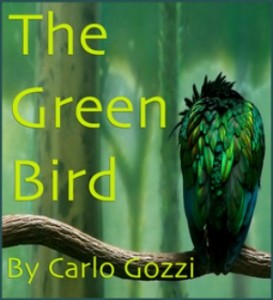 Last weekend was not only Halloween, but also opening weekend of The Green Bird, performed by Vanderbilt University Theatre. Because I’m a Theatre minor currently taking Theatre 100: Fundamentals of Theatre, I had to usher and attend one performance and then write an analysis (which I’ll do as soon as I’m done with this blog…).

While I have class in Neely every other day, I’d never actually learned how the seating works, because the setup isn’t like a typical auditorium. I arrived early on Saturday night and quickly caught on and showed people to their seats only thirty minutes later. Then the actual performance started and it was great! The play’s about these two messed up kingdoms, it’s kind of hard to describe, but it was really funny. The acting was great (our very own Malina Halman was AWESOME as Ninetta), and it was really cool to see the set come together for the final performance, since I had seen it in all its different stages.

Also, after the show ends on November 12, our theatre class is having a panel discussion with the costume designer Alex Sargent, the scenic/lighting designer Amanda Sweger, and the director Leah Lowe (who is actually the daughter of my Orgo professor, Dr. Lowe).

While I love seeing theatrical performances anytime, this one felt special because I’ve seen more behind-the-scenes work than ever before and could really appreciate the final product.